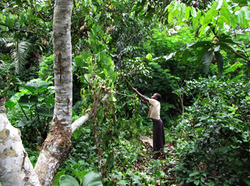 Cameroonian boy hunting for fruit in the forest illustrates how local communities derive livelihoods from customary land rights, which would be taken from them when the rights are transferred to investors for other uses. Photo Credit: Jeff Haskins/ Burness Communications
Rights and Resources Initiative (press release) | 1-Feb-2012

LONDON (1 February 2012)—New studies released in London today suggest that the frenzied sell-off of forests and other prime lands to buyers hungry for the developing world's natural resources risk sparking widespread civil unrest—unless national leaders and investors recognize the customary rights of millions of poor people who have lived on and worked these lands for centuries.

"Controversial land acquisitions were a key factor triggering the civil wars in Sudan, Liberia and Sierra Leone, and there is every reason to be concerned that conditions are ripe for new conflicts to occur in many other places," said Jeffrey Hatcher, director of global programs for the Rights and Resources Initiative (RRI), which sponsored an expert panel today at the Royal Society on the trends shaping rural lands and rights worldwide.

In presenting the results of an analysis of tenure rights in 35 African countries, by international land rights specialist Liz Alden Wily, Hatcher noted that despite the clear potential for bloodshed, "local land rights are being repeatedly and tragically ignored during an astonishing buying spree across Africa." Alden Wily's review found that the majority of 1.4 billion hectares of rural land, including forests, rangelands or marshlands, are claimed by states, but held in common by communities, affecting "a minimum" of 428 million of the rural poor in sub-Saharan Africa. "Every corner of every state has a customary owner," Alden Wily concluded.1

RRI brought together experts to release new findings on land tenure and investor risk worldwide, and to explore the land conflicts that have fractured Liberia and South Sudan. Aggravating the unrest in both countries were unilateral government decisions to sell off resources held on community lands.

Land rights experts note that indigenous and traditional communities are not generally opposed to economic development. Rather, they say the outrage stems from their total exclusion from a process that threatens to deprive them of land and resources essential to their survival. And, according to Alden Wily's analysis, two-thirds of all the lands and resources investors are acquiring in the latest global land rush are in sub-Saharan Africa.

The Liberian and South Sudanese experts said local communities in both countries are beginning to react to the impact land deals are having on traditional access to forests, rangelands and marshes. In Liberia, where 30 percent of the country is reported to be under timber, mining and agricultural concessions, local villagers have blocked the plans of a Malaysian company to plant oil palms on lands leased from the government of President Ellen Johnson Sirleaf. And today, two Liberian NGOs reported that their government is quietly issuing new "private use permits" to logging companies, violating national laws and the rights of local communities, and possibly undermining a recent pact signed in May 2011 with the European Union (EU) to ensure that timber exported to the EU is derived from legal sources and benefits the people of Liberia.2

"The world is at a turning point in the global land grab, with the addition of dozens of new players, including the BRICs, South Africa and the nations of the Middle East, who are combing the planet for the natural resources required to sustain their rapid development," said RRI's Andy White. "The epic clash of this demand for land and resources—whether in the forests of Liberia, or in the quilombolas (former slave communities) in the Brazilian Amazon—is highly combustible, and must be resolved."

The Customary Rights to Forests, Rangelands and Marshlands

Of the 35 African nations covered in Alden Wily's analysis, only nine got high marks for being "broadly positive" for their treatment of local, customary rights. The others were graded either "mixed" or "negative." The nations ranked "most positive" were Uganda, Tanzania, Burkina Faso and Southern Sudan. But even in those countries, Alden Wily said, the laws are not respected in practice, and local communities are rarely included in negotiating the terms of a purchase or lease, even in countries where laws recognize such lands as private property.

"With the speed and scale of this surge into Africa in the last five years, the chief concern should be that investors are cutting deals with governments for land that really belongs to individual rural communities," said Alden Wily, who was interviewed in advance of the RRI event in London.

"The new land rush increasingly looks like a final enclosure of the world's common lands," said panel moderator Fred Pearce, environment writer and author of the upcoming book, The Landgrabbers: The New Fight Over Who Owns the Earth. "Throughout the developing world, traditional rights to land and resources are being steamrollered in the name of a warped and outdated view of economic development."

White said that engaging investors will be key to protecting the land rights of local communities, and that, in turn, will be critical to achieving the goals of slowing climate change, ensuring food security, and reducing poverty embraced by negotiators and advocates at United Nations meetings such as December's COP-17 in Durban.

"Investors have much to lose if they fail to consider the customary rights of local communities," White said. "Civil unrest will be the outcome, and it will affect their bottom line. So respecting and strengthening tenure rights is a win-win for investors, and for the people who currently view the vast forests and pastures of the developing world as their own."

Experts said it's too early to predict whether the spate of land deals recently negotiated in sub-Saharan Africa will produce widespread and destabilizing conflicts. But relatively few large-scale enterprises are fully established, White noted, so the people who will be affected by the deals have yet to realize their forests, marshes and rangelands have been sold or leased.

"Communities often do not find out what is going on until the bulldozers arrive," White said.

Increasingly, however, local communities and the NGOs that support them are learning more about their rights and how to enforce them.

A broad coalition of Liberian organizations, including the Sustainable Development Institute (SDI, Liberia) and Green Advocates Liberia, today charged their government with issuing alternative "private use permits" on an estimated 700,000 hectares of forestland. They argued in a press release and accompanying report that the new permits allow the companies to sidestep national laws and that it goes against the spirit of the country's pact with the EU, known as the Voluntary Partnership Agreement (VPA).3 A legally-binding trade agreement between Liberia and the EU, the VPA will go into effect in 2013. It defines what constitutes legal timber and sets up an assurance system able to verify compliance and ensure that timber for export can be traced back to the source.

Also in Liberia, villagers in Grand Cape Mount and Bomi counties continue to battle a deal the government signed for a 63-year lease on 220,000 hectares with Malaysian palm oil giant Sime Darby. The company froze its operations, following the villagers' appeal to the Roundtable on Sustainable Palm Oil, an international certification body. But, in an odd twist, talks are at a standstill, as the government has blocked the company's efforts to meet with villagers.

"You don't need guns to kill people," said Alfred Brownell, an attorney and director of Liberia's Green Advocates. "When you take food from a village by destroying farm lands and cash crops, you are starving its people. If you destroy their grave sites, poison their drinking water, obliterate their cultural heritage, divert their rivers, streams and creeks, there is no doubt you are removing an ethnically defined population from their land. The international community must not ignore these massive human rights abuses. The time to act is now."

Sime Darby froze its operations following the villagers' appeal to the Roundtable on Sustainable Palm Oil, an international certification body. But, in an odd twist, talks are at a standstill, says Brownell. The government has apparently blocked the company's efforts to meet with villagers, arguing that such a meeting would constitute a violation of Liberia's sovereignty.

South Sudan is one of the countries cited by Alden Wily for doing a good job with protecting customary rights under the law. But in practice, the government signed deals for control of nine percent of the new nation's lands even before announcing its independence. With agreements signed since 2011, the percentage is expected to be even higher, said David Deng, research director, South Sudan Law Society, South Sudan. Deng is concerned that the new investors won't understand what it is to operate in such a fragile nation, so soon after the end of its terrible civil war. "I would remind them that land was at the heart of the civil war in South Sudan," said Deng, who spoke at the RRI event today. "And now, with independence, communities expect that the sacrifices that they made during the war will be repaid by recognizing the legitimacy of their customary land tenure. Anything less would undermine the nation's fragile peace."

The panel discussed the many ways, and leading examples, of avoiding these conflicts—including the example of Brazil—which has achieved both forest conservation and advanced development by recognizing local people's rights to forests. "It's tragic, since these conflicts between people and their governments, and risks to investors and development, can so easily be avoided," said White. "We are hoping that the governments that gather in Rio de Janeiro for the UN conference on sustainability in June will respond to this potential, and quit handing out the peoples' land and forests to outsiders."

The Rights and Resources Initiative (RRI) is a strategic coalition comprised of international, regional and community organizations engaged in development, research and conservation to advance forest tenure, policy and market reforms globally. The mission of the Rights and Resources Initiative is to support local communities' and indigenous peoples' struggles against poverty and marginalization by promoting greater global commitment and action towards policy, market and legal reforms that secure their rights to own, control and benefit from natural resources, especially land and forests. RRI is coordinated by the Rights and Resources Group, a non-profit organization based in Washington, DC. For more information, visit www.rightsandresources.org.
Original source: RRI
TWITTER
FACEBOOK
WHATSAPP
PRINT
E-MAIL
TWITTER
FACEBOOK
WHATSAPP
E-MAIL