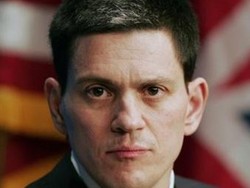 Miliband served as Britain’s secretary of state for the environment, food and rural affairs. Indus Basin Holdings, which is incorporated in Mauritius, engages in contract rice production with farmers in Pakistan's Indus Basin through its subsidiary Rice Partners. Through another subsidiary, Longhorn Dairies Ltd, it is constructing a 1500-animal corporate dairy farm, with a herd of Holstein-Friesian Jersey cows crossbred animals, and an off-take agreement with a large dairy processor. Investors in Indus basin Holdings include Swiss billionaire and industrialist Baron Lorne Thyssen-Bornemisza and US billionaire and venture capitalist Tim Draper. (Photo: Reuters)
Express Tribune | 21 January 2012

In what appears to be a coup for the fledgling Pakistani private equity industry, Indus Basin Holdings has managed to get Britain’s former foreign secretary David Miliband on board as a senior adviser.

“We are delighted to be able to bring on board the expertise of Miliband who knows the region and its challenges well,” said Indus Basin founder and CEO Aamer Sarfraz, according to a press release issued by Miliband’s office. “He shares our conviction that investment in Pakistan’s agricultural sector can have substantial long-term impact on the country’s poorest farming communities.”

“I am delighted to be advising Indus Basin Holding, a company that is investing in Pakistan’s future at a time of such fundamental importance,” said Miliband in a press statement. “I care deeply about Pakistan, the development of its economy and its future in the wider region. IBH is committed to developing an agricultural sector which has huge potential, but currently lacks investment. I look forward to working with IBH in building support and investment in Pakistan’s agricultural capacity and productivity.”

Some of the largest private equity firms in the world are known for employing high profile non-serving statesmen on their advisory boards. This practice was made famous by the Washington-based Carlyle Group which employed both former US president George Bush Senior and former British prime minister John Major on its various advisory boards. More recently, former Pakistani prime minister Shaukat Aziz joined the advisory board of the US private equity firm Blackstone Group.

The purpose of employing such high profile people on a company’s advisory board is two-fold. Firstly, their experience as statesmen gives them extraordinary macro-level insight in terms of the opportunities that exist around the world. Secondly, their connections both in governments as well as amongst large corporations and wealthy individuals often make them a valuable resource in opening otherwise inaccessible doors and closing deals.

Indus Basin Holdings is only a relatively recent entrant into Pakistan’s nascent private equity and venture capital space but already began to attract a lot of attention for the kinds of big-name investors it was able to attract in its fund, which is focused on capitalising on opportunities presented by raising productivity levels in Pakistani agriculture.

The company’s investors include Tim Draper, the famous American venture capitalist known for being an early investor in Skype and Hotmail, and Baron Lorne Thyssen-Bornemisza, a Swiss aristocrat whose family owns the ThyssenKrupp, a German technology conglomerate with over 670 subsidiaries and 200,000 employees worldwide.

Indus Basin’s investments currently include Agroventures, a Faisalabad-based breakfast cereal manufacturer, and Rice Partners, a company that is focused on contract farming and marketing Pakistani rice directly to North American and European retailers.