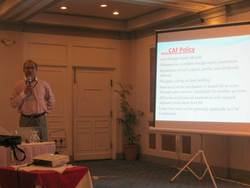 ISLAMABAD: Speakers at a two-day national level moot flayed the corporate farming in different parts of Pakistan, because it is damaging for the country’s agriculture. They argued that it would lead to food insecurity, hunger, poverty and convert the country from net food exporter to food importer – grave threat signs of which have already become visible.

The moot ‘National Dialogue on Land Grabbing’ opened here today has been organized by the Society for Conservation and Protection of Environment (SCOPE) in collaboration with the International Land Coalition, Land Watch Asia, Asian NGO Coalition – for Agrarian reform and rural development and National Peasants Coalition of Pakistan.

The dialogue was attended by a member of civil society organizations, NGOs, educational institutions, farmers’ organizations, journalists, researchers and students. They also actively participated in the discussion on the worsening situation of the land grabbing and its effects on different sectors of Pakistan’s economy, particularly agriculture.

Addressing the participants of the dialogue, Chief Executive Officer of the SCOPE, Tanveer Arif gave an overview of the current state of the land grabbing in the country, its reasons and effects.

“Corporate farming in the country is the worst form of land grabbing in the country,” he stated and added, “There is urgent need to put an end to it. Because, it is cause of unsustainable farming practices, use of exotic crop species and other farm inputs that have been harming the fertile soil of the country.”

He pointed out that the land grabbing is not problem of Pakistan alone. There is also a rush for land grabbing in other part of the country, particularly in developing countries by the investors of rich nations.

“Major divers behind the rush for land grabbing are food, agrofuel, timber, carbon sequestration and tourism,” he said. Today, much of over one billion hungry people live in Ethopia, Ghana, Madagascar and Mali, where process of land grabbing by investors of developed countries has expedited, he remarked.

Tanveer Arif pointed out that unstable food grain markets and rising price, deepening food insecurity also outcome of the land-grabbing in Asian, African and Middle East countries. But, now Pakistan, Uganda, Brazil, Cambodia and Sudan are among the most favored countries for international land grabbers, who are also behind the corporate farming.

The land grabbing and corporate farming has also faced stiff resistance in different forms by the members of civil society organizations including farmers’ organizations, he said.

“Policy measures to facilitate CAF in order on the pretext of attracting much-needed foreign investment in the ailing agriculture sector, transfer of modern farming technology from rich nations to the country and modernization of the sector were categorically announced without pointing out negative effects of CAF on the agriculture – mainstay of the country’s economy,” he recalled.

He also said that so much so, corporate farming ordinance (CFO) was passed in year 2001, under which the listed corporations can lease land in the country for a period of 99 years, broken into two periods of 50 and 49 years. Besides, the then government went on and identified state lands to lease under the controversial CFO.

He also recalled that investment Policy for Corporate Agriculture was also prepared by the federal ministry of investment, which offered incentives to those investing in the CAF in Pakistan. In the policy, the investors have been allowed 100 per cent foreign equity, and the agricultural machinery technology to be used for CAF was expected from custom duty and sales tax on import.

But, those initiated corporate agriculture farming in different parts of the country hardly did so. Instead, they started to exploit the fertile land in the shape of exotic farming techniques, which would turn the fertile land ‘infertile’ after few years, he pointed out.

Tanveer Arif of SCOPE further that millions of hectares have been leased or sold so far. The United Arab Emirates (UAE ), which imports 85 per cent of its food, purchased 324,000 hectares of farmland in the Punjab, Balochistan and Sindh provinces in June 2008. Besides, the two UAE firms, Emirates Investments Group and Abraaj Capital, also expressed their interest in investing directly for corporate farming, he said.

The CAF has also horrible effects on the ecology, said environmentalist Mahjabeen Khan, program coordinator at the SCOPE.

“Agro-fuel mono cropping will destroy ecological balance and replace food crops,” she said and added, “Major target of investors is to grow food and export to countries of their origin.”

She said that use of patented seeds, pesticides, fertilizers and mechanization of the agriculture would transform the country’s agriculture from subsistence-based to corporate and export-oriented and hurt small farmers. This CAF-induced scenario would deepen rural poverty, hunger and unemployment.

“It is also possible that the corporatization of the farm sector will lead large landlords to convert to corporate farms, immunising their land from future land reforms and invest in capital-intensive technologies that will displace farm workers,” she said.

The speakers recommended different measures to check CAF in the country. It was suggested that some of them include moblisation of civil society organizations (CSOs) and acquainting them of the dangerous effects of CAF. The also suggested regular vigilance, observance of land ceiling limits, enactment of labor laws of land, and promotion of cooperative farming and ban on export of food grains until it is surplus.