Petition calls for halt to new 'land grab' in Africa 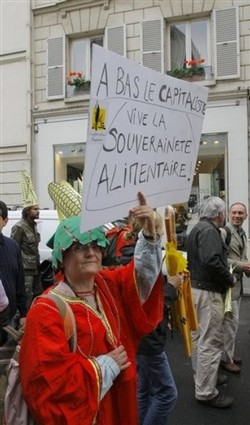 As the G20’s agriculture ministers arrived in Paris for a two-day meeting, more than 500 non-governmental organisations (NGOs) from around the world have delivered a petition calling for a halt to land grabbing under the guise of “responsible agricultural investment”.

The Dakar Appeal Against Land Grabbing, originally drawn up at the World Social Forum last February, claims that “millions of peasant families and other rural and indigenous folk are being thrown off their lands and deprived of their livelihoods” as a result of this policy.

“While agriculture ministers from the world’s 20 richest countries are discussing what to do about food price volatility and the growing hunger crisis, millions of hectares of fertile land, along with their water resources, are being grabbed”, according to the petition.

Lands occupied by “peasants, pastoralists, herders, fisherfolk, indigenous peoples and traditional healers” were being “converted into massive agribusiness operations by private investors who want to produce food supplies or agro-fuels for international markets”.

According to a report by the Oakland Institute, a US environmental think tank, “the same financial firms that drove us into a global recession by inflating the real-estate bubble through risky financial manoeuvres are now doing the same with the world’s food supply.”

The report, Understanding Land Investment Deals in Africa, focuses on seven African countries and claims that Harvard, Vanderbilt and other American universities with large endowment funds have invested heavily in African land in the expectation of making huge returns.

Foreign firms farm the land to consolidate their hold over global food markets and to “make room” for export commodities such as biofuels and cut flowers. “This is creating insecurity in the global food system that could be a much bigger threat than terrorism,” the report said.

“Lands that only a short time ago seemed of little outside interest are now being sought by international investors to the tune of hundreds of thousands of hectares” according to a recent report by UN’s Food and Agriculture Organisation. “This is rightly a hot issue ...”

Several factors underpinned these land acquisitions, including food security concerns, particularly in investor countries, “which are a key driver of government-backed investment”, as well as expanding biofuel production, “an important competing land and crop use”.

Previously, many of the biggest land deals in Africa involved Chinese and Middle Eastern firms acquiring fertile land to grow cheap food for people back home. But the report suggests that the latest “movers and shakers” are western investors, backed by significant funds.

“Analysis of the contracts reveals that many of the deals will provide few jobs and will force many thousands of people off the land,” the Oakland Institute said, adding that control of global food markets and agricultural resources in this way would have “profound implications”.

It cited research by the World Bank and others suggesting that nearly 60 million hectares – an area the size of France – has been bought or leased by foreign companies in Africa in the past three years alone, both to grow food for export and also to cash in on bio-fuels.

“No one should believe that these investors are there to feed starving Africans,” according to Obang Metho, of the Solidarity Movement for New Ethiopia, a US-based campaign group. “These deals only lead to dollars in the pockets of corrupt leaders and foreign investors.”

One of the largest deals involves soon-to-be independent South Sudan, where as much as 9 per cent of its land area had been acquired by foreign firms; it was negotiated by a Texas-based firm, Nile Trading and Development, with a local co-op “run by absent chiefs”.

Saudi Star, a company controlled by billionaire Sheikh Mohammed al-Amoudi, is planning to invest as much as $2 billion (€1.39 billion) in developing half a million hectares of land in Ethiopia to grow rice, wheat, vegetables and cut flowers for the Saudi market.

The EU’s target of switching 10 per cent of all transport fuel to plant-based biofuels by 2015 is also blamed for the “land grab” in Africa. An an ActionAid report last year estimated that the EU would need 17.5 million hectares to grow biofuel crops if it is to meet this target.