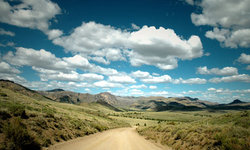 A Chinese agribusiness firm is to buy a large swath of land in Patagonia. Critics fear it will bring heavy agrochemical use and ecological degradation, and strain the region's water resources

The attraction to the Chinese of access to an area of land in Patagonia larger than Cornwall is obvious. As China's economy grows and its population becomes more urbanised, diets are changing rapidly. People are eating more industrially produced meat and dairy products, and buying more processed foods.

Soya is the feedstock for this revolution, but demand for it can no longer be met within China. So the Chinese state-owned agribusiness company Beidahuang has joined the global scramble for land and water that has accelerated since food prices spiked in 2008.

Last year it was confirmed that the company had signed an agreement, with the government of Patagonia's Río Negro province, which provides the framework for it to acquire up to 320,000 hectares (790,000 acres) of privately owned farmland, along with irrigation rights and a concession on the San Antonio port.

Details of the deal, alleged to have been kept quiet, have been emerging in recent weeks as Chinese technicians have started work.

Beidahuang has also reported a 2008 deal on 200,000 ha in the Philippines, and says it plans to buy palm oil plantations and grain terminals this year as it pursues the Chinese government's policy of securing food supply lines from abroad.

Beidahuang, based in the north-eastern province of Heilongjiang, is the leading soya producer in China and one of the country's five largest soya processors. It also raises more than 600,000 cows, 1.3m pigs and more than 6m chickens at any one time.

The company believes its expertise in large-scale farming can be transferred to Argentina, according to Juan Manuel Accatino, the region's deputy secretary for agriculture in Río Negro, who was close to the deal. The arrangement made good economic sense, Accatino said. "We can foresee global shortages of land, water and energy, and Río Negro can offer all three."

Argentinian environmental groups and constitutional experts are outraged. Eduardo Barcesat is a top constitutional lawyer who has been helping the federal government of the Argentinian president, Cristina Kirchner, draft legislation that would restrict foreign ownership of Argentinian land. The laws would also provide, for the first time, a full register of all landholding so that authorities can keep track of who owns what.

"Chinese and Indian people have been coming to Argentina over the last five years and would be happy to buy all our land, whatever the price. American businesses have been buying access to our water," Barcesat said. "We need our own people to eat well first, and after that we can feed the rest of the world. We want more small and middle-sized owners, we don't like the excessive concentration, and we want farmers who will be careful with the land, not exploit it."

Research from the International Land Coalition, and Oxfam Novib, the Netherlands affiliate of Oxfam International, has identified more than 1,200 international land deals covering more than 80m hectares since 2000 – the vast majority of them after 2007. More than 60% of the land targeted was in Africa.

The Río Negro region is famous for its fruit orchards, which produce 70% of the country's apples and pears, exports eaten in northern Europe when the fruit season in that continent ends.

Environmentalists in Río Negro say the Chinese arrival will mean heavy use of agrochemicals, ecological degradation and severe strain on the region's water resources. Some of the land in question is virgin forest that would be deforested.

Dams have already cut the flow of the Negro river, they say, and Chinese plans to invest $20m (£12m) immediately to build irrigation infrastructure would strain resources further. The campaigners say that since soya cultivation is highly mechanised it will prompt unemployment in the area, as it has elsewhere in the country where many rural communities have seen an increase in deep poverty as jobs are lost.

Elvio Mendioroz, president of Uñopatún, an agro-ecoclogical group that opposes the Chinese deal, said the agreement had been kept secret. "China has run out of land to feed its people, and is suffering drought and soil erosion, so they come here.

"But it will create the same problems for us. There has been no consultation, yet it's already signed."

Accatino thinks the deal has been misunderstood. Río Negro's provincial government was merely acting as a facilitator for the Chinese, he said, who would have to negotiate with the private owners of land to buy sections. The port concession, reported as being for 50 years, would depend on an evaluation of its feasibility.

Accatino said: "We will take into account the environmental concern about further expansion of soya and dependency of this monoculture. We would never endanger the Negro river."