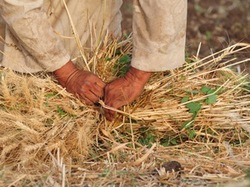 
Food prices are rising, but the impact is not being felt equally around the world, says environmentalist Lester Brown.

Brown, the founder and president of the Earth Policy Institute, argues that food has quickly become the hidden driver of world politics in a piece published in the May/June issue of Foreign Policy.


"If you're in Pakistan, and you go to the local market to buy wheat to hand-grind into flour to make chapati, and the price of wheat doubles, the price of your chapati basically doubles," he tells Fresh Air's Terry Gross. "They're not insulated from the doubling or tripling of world grain prices the way that we [in the United States] are. ... And this is one of the factors feeding the unrest in the Arab world, North Africa and the Middle East."


Brown says the world's rapidly expanding population has created elevated demand for grain, milk, cheese and eggs, but changes in climate and irrigation have made it increasingly difficult to increase production accordingly. Increased demand has also stripped the world of much of its excess crop surpluses. For example, Brown says, in 1965, when the Indian monsoon failed, the United States sent a fifth of its total wheat crop to India to avoid famine.

"We couldn't do that today because we don't have that sort of slack in the system," he says. "The problem is not that we're producing less grain — we're producing more grain — but we're not increasing production fast enough to keep up with the growth in demand."

Because of the increased demand for food, the ability to grow crops, Brown says, is increasingly becoming a new form of "geopolitical leverage."

He points to the grain markets in 2007 and 2008, when grain prices rose considerably. Countries that typically exported their grain to other countries clamped down on their exports, to try to keep their own domestic prices low. For example, Russia and Argentina both restricted wheat exports, while Vietnam, the world's No. 2 rice exporter, banned rice exports for several months.

"That created a panic in the importing countries because they didn't feel like they could any longer count on the world market to supply their needs," Brown says.

In response, the importing countries negotiated and in some cases leased land in other, more irrigable countries to grow grain and produce biofuels for themselves. Countries like Saudi Arabia, China and South Korea have all leased land in Africa, where the governments lease irrigable land for as little as $1 an acre.

"This is becoming a huge political issue in many parts of the world, and it's creating conflict between local populations and these investors," Brown says. "Two of the principal countries that have been leasing land long-term are Ethiopia and Sudan, both of which are high on the list of the U.N.'s World Food Program. ... And the idea that the governments in these countries are selling huge chunks of land in these countries to other governments is really very difficult to explain. And what we're probably looking at down the road is a situation where there will be extreme hunger in some of these countries where the investments are being made, and people will simply resist — and try to block the trucks that are hauling the grain from the fields to the ports. ... It's a new situation and quite unlike any that we've faced before."