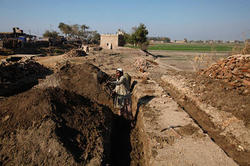 The food prices index around the world has surged to a new height compelling a few countries of North Africa and the Middle East to store wheat and rice in bulk. And governments of Mexico, South Korea and developing countries of Asia are paying huge subsidy to buy and store crops. It is also feared that rising oil price may result in increase in demand of food items. The Food and Agricultural Organisation (FAO) has advised developing countries to avoid the option of producing bio-fuel from corn.

According to a report, a number of developing countries have used 120 million tons of cereal food as alternate source of energy by converting it to bio-fuel paying huge subsidy of $13 billion. Naturally, this will lead to rise shortages and increase in prices which may create serious food shortage as suffered in 2007-08. To confront such eventuality, Pakistan will have to activate research and development cells of its agricultural sector and encourage the use of high yield seeds to improve productivity so that it not only meets its domestic needs but also boosts exports. Though the present government, with a view to increase the income of farmers and curb smuggling of wheat across the border, has increased support price of wheat to double from Rs425 to Rs950 per maund, the move has resulted in increase in wheat and bread prices.

The Director of World Food Programme in Islamabad has recently described the wheat support price as the root cause of price hike. According to a rough assessment, 10 per cent increase in support price results in three per cent rise in prices of food items. The 120 per cent increase in the support price of wheat has resulted in an increase of 32 per cent in the prices of its items. On the other hand, the recent flood adversely affected production of crops taking prices of food items to a new height and creating sugar crisis which rose to Rs90 per kg, but with cut in sales tax by 50 per cent, the price was brought down. Since the government will not be able to continue this subsidy for a long period, sugar price may go up again by Rs10 per kg.

Experts are of the view that the issue of food security will keep on nagging the world. Thank God, Pakistan is now a wheat and rice exporting country. But then for tea and cooking oil it has to rely heavily on imports. Recently because of increase in fuel and power rates, food items recorded an increase of 17 per cent. Government sources said import of our food items recorded a rise of 74 per cent between July 2010 and January 2011, taking our import bill to $3.15 billion. This trend is visible globally and the uprising in Tunisia, Egypt and Libya are its consequences.

Last year I visited the UAE, representing a delegation of businessmen and met UAE Minister for Commerce Sheikha Lubna Khalid Al Qasmi to discuss bilateral trade and investment. She informed me that during the last GCC meeting the question of food security in the Gulf countries was high on their agenda and it was decided to purchase agricultural land in other countries to produce and import food items for the Gulf states. The UAE wanted similar arrangements with Pakistan.

I informed her that the UAE was already cultivating Alfalfa in some parts of Sindh for export to UAE. In addition to Pakistan, UAE is also cultivating fodder in Sudan, Spain, Canada and some other countries. Sheikha Lubna said the UAE was even ready to build small dams for cultivation on the lands they would acquire in Pakistan, provided the government ensured that there would be no ban on export of these items. In short, food security is common concern for both rich and poor. Both developed and developing countries are therefore, making long-term plans to meet their food requirements. Pakistan is fortunate to have a vast fertile land and an effective irrigation system. We are blessed with four seasons and our farmers are hard working. All we need is good network of transportation of farm products from field to storage. We should also add value to our items and improve packaging for exports.

Owing to huge increase in prices of agricultural products, the farmers/agriculturists are supposed to have earned additional Rs250 billion through cotton trade and Rs230 billion from wheat and rice. Unfortunately much of this additional amount went to the pockets of the middlemen and the big landlords. The Director World Food Programme in Islamabad, Wolfgang Herbinger in a report said that due to increase in food prices about 70 per cent of flood victims in Pakistan had to borrow money to meet their day-to-day needs. Pakistan is producing food items in abundance but due to high prices and poverty, the purchasing power of the common man is gradually decreasing. It is therefore imperative to review the agriculture policy to attain autarky in food crops and provide essential food items to the common man at affordable rates.

—The writer is Advisor to PM on Textiles.