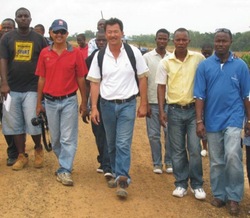 It appears that the Bomi County operations of Sime Darby are being hindered as locals there are reportedly holding back lands leased by the government of Liberia to the company.

Sime Darby, a leading investor in oil palm, has told our business reporter who over the weekend visited the company’s operations in Bomi and Grand Cape Mount counties, that the operations in the county are dwindling due to an apparent reluctance on the part of citizens, especially those occupying lands in the concession areas, to vacate the land.

The Company’s Management also made it clear during a visit of its facilities by university students from Bomi County last Saturday that they were finding it very unlikable and difficult to reclaim the lands from the people.

The Management called on the student community of Bomi County and the government to intervene.

“We are encouraging you to come in and help us talk to our people that the only way this company will be able to develop their homes and create more jobs for their children is for them to see reasons to leave the lands they are occupying,” noted Mr. Zolu She, Sime Darby’s Bomi Estate Manager.

It is not clear whether there is a relocation package in the deal, but residents there appeared to be relaxed amidst Sime Darby’s pleas.

Sime Darby, in its concession agreement with the government of Liberia, is investing over US$800 million in oil palm in that part of Liberia.

It may be recalled that in 2009, the government of Liberia awarded 120,000 hectares of land plus an additional 100,000 hectares to Sime Darby in a concession agreement that allows the company to operate in Grand Cape Mount, Bomi, and Gbapolu counties.

Addressing a joint news conference with the Bomi university students in Guthrie Bomi County, Mr. Seh warned that the apparent reluctance of the citizens to vacate the land has a pullback effect on the company’s operations in the county.

But, some locals in the county told our reporter off the record that they wanted to know what benefits they have in the concession agreement. Bomi County is the home of President Ellen Johnson Sirleaf. The county is rated the poorest in the republic.

“We don’t intend to stop this company, but we want the company or the government to tell us what is it that we have in the agreement,” said an elderly man in Guthrie.

The Bomi university students, who were about 20, also praised the company for making headways in its drive to revamp the housing units at Guthrie Plantations, including the health facility.

The spokespersons for the students, Murphy Morris of the UL and Abraham Varney of AMEZU, told the company’s management to continue the good work.

The students promised to gain access to the agreement in order to make sound recommendations for the betterment of the county and the country at large.

Mr. Raymee Hashim, operations manager of Sime Darby Liberia, and Mr. Mohd Zulkifi, disclosed that their company already had nearly one million palms on nurseries since it began operations in January, 2010.

Mr. Zulkifi, for his part, encouraged Liberians to help his company to grow bigger and better.

He pledged his company’s commitment to making Liberia a hub of the production of finished oil palm products in Africa.

Our reporter says the Bomi students were particularly happy with the level of development being carried out by Sime Darby in its Grand County project.

Sime Darby is currently constructing several housing units for its workers in Grand Cape Mount and Bomi counties, but the Cape Mount is a landmark.

Within its housing estates under construction on the main road in Cape Mount are clinics, schools, playgrounds including, a fish pond, electricity and water supplies, among others.

Wages varies on the Sime Darby oil palm plantations as permanent employees make US$5 per day plus two bags of rice each per month, while contractors or ordinary laborers make US$3 per day plus a bag of rice per month.