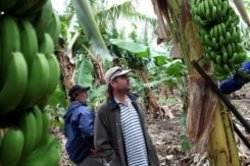 South Africans buying farms in other African countries, such as Lance Spear (above), who owns a large plantation in Mozambique, want bilateral investment treaties to protect their investments. (Photo: AFP)

South Africa’s Supreme Court of Appeal has let the country’s government off the financial hook, after ruling it is not liable in cases related to the unlawful land grab in Zimbabwe.

The court on Monday ruled that a High Court decision ordering the government to compensate a South African farmer for land invasions in Zimbabwe, was wrong in law.

Farmer Crawford von Abo established a large and profitable farming enterprise many years ago in Zimbabwe, but was left penniless when his 14 farms were destroyed by land invasions under Robert Mugabe’s land grab scheme. Since 2008 Von Abo has tried to get the South African government to take diplomatic steps to address the violation of his rights in Zimbabwe, arguing that as a citizen, his government should have protected him.

In February 2010 the High Court found that the South African government had a constitutional obligation to provide diplomatic protection and ordered that it had 60 days to take all necessary steps to have Von Abo's violation of rights by Zimbabwe remedied.

But the Supreme Court of Appeal has now said that although South Africa’s response to Von Abo’s plight was ‘inappropriate’, the High Court made ‘vital mistakes of law’ when it made its decision last year.

"Despite that conclusion it found that the breach of the duty to respond appropriately to Mr Von Abo's request could not legally give rise to liability for damages caused by the Zimbabwean government's violation of Mr Von Abo's human rights,” the court said in a media briefing.

South African lawyer Willie Spies, who has represented other South African farmers who are trying to fight the loss of their Zimbabwean farms, said the ruling is a disappointment. He agreed that a legal precedent has now been set that excludes the South African government from being liable in such cases.

“But watch this space,” Spies said, explaining: “The Von Abo case happened when there wasn’t a bilateral investment agreement (BIPPA) between South African and Zimbabwe.”

“If a similar case arises when land invasions happened during the time that a BIPPA has been signed, then the outcome in South Africa might be quite different,” Spies said.