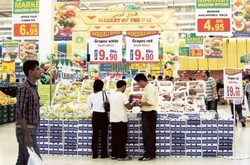 Food gap or the difference between exports and imports of foodstuffs continues to rise steadily as far as Arab economies are concerned. The latest credible statistics put the deficit at $27 billion (Dh99 billion) in 2010, up from $23 billion only in 2008. Worse, the figure is subject to rise further in the years to come amid the absence of viable solutions to the situation.

The rising deficit reflects the hard facts including the growing population from 335 million in 2008 to 350 million in 2010. The combined population of the Arab countries is projected to increase to about 500 million by 2025 due to 2.3 per cent yearly growth.

Other factors for stronger demand include improved living conditions thanks partly to wider access to health services, and thereby higher demand to meet the needs. Other factors include problems with productivity on the one hand and relatively high costs of farm equipment on the other.

Interestingly, the Gulf Cooperation Council (GCC) countries stand out by accounting for around 40 per cent of the food import bill of the Arab world, reflecting the need and prosperity among other factors. Undoubtedly, the figure is not commensurate with population, as the GCC countries have only 11 per cent of the Arab population.

Nevertheless, such statistics partly reflect certain facts of GCC countries including the persistent tendency for imports to satisfy needs. GCC food imports are likely to grow steadily in years to come reflecting the rise in demand.

Sadly, there is little the Arab countries can do regarding the realities of limited water resources and arable land. For instance, it is believed that merely 10 per cent of the land in GCC countries is arable, primarily located in Saudi Arabia.

Nevertheless, new technologies in this fast moving world could help bridge the gap between consumption and production of foodstuffs.

Undoubtedly, support for local production could only come at the cost of scarce public funds. According to the Gulf Research Centre, production of a tonne of barley requires 1,212 cubic metres of ground water reserves in Saudi Arabia, considerably higher than the global average.

Yet, in a far cry from the policies of the 1970s and 1980s, Saudi Arabia is no longer insisting on growing different types of crops on its farmlands due to the cost factor.

As a partial solution, the GCC countries, the main importers of foodstuffs, have generally opted to explore investment opportunities in farmland abroad.

The UAE and Saudi Arabia are particularly active in this respect. For instance, the UAE has purchased thousands of acres of arable land in Sudan to grow products for the home market. Also, Bahraini investors help meet demand in the kingdom from farmland bought in Thailand and the Philippines.

Yet development of a pan-Arab framework to bridge the food gap is not possible in the foreseeable future due to socio-political realities. Unfortunately, relationships among some Arab countries are anything but cordial, something displayed during the recent turmoil in several Mena countries including Tunisia, Egypt and Libya. Nevertheless, the future could hide new answers for the food gap in the Arab world.

The writer is a Member of Parliament in Bahrain.