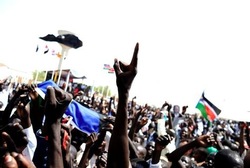 Sudanese celebrate following the announcement of the results in the Southern Sudan referendum, which saw South Sudan vote for independence from the north.

KHARTOUM, Mar 27, 2011 (AFP) - Egypt said Sunday that the completion of a partially built canal spanning an unnavigable section of the Nile in south Sudan was a top priority, as Prime Minister Essam Sharaf visited its soon-to-be partitioned southern neighbour.

"We want to start the building of the Jonglei Canal, because it is a top priority. It offers to provide four billion cubic metres of Nile water (annually)," Egyptian cabinet spokesman Magdi Radi told a news conference in Khartoum.

The 360-kilometre (220-mile) canal project, which would drain the swamps in south Sudan's Jonglei state and carry the water into the White Nile, was begun in 1978 but abandoned just six years later after a raid by southern rebels.

Radi was speaking after a joint ministerial meeting on the first day of a two-day visit to Sudan by an Egyptian delegation led by Sharaf which also includes the foreign, agriculture and irrigation ministers.

Sudan is an important ally for Egypt both in terms of its agricultural potential and in Cairo's efforts to secure an acceptable agreement with upstream Nile countries about the future of its vital water supplies.

Sharaf said Egypt was the third largest investor in Sudan, with current investments amounting to $5.4 billion, and that he wanted to see this rise.

The Egyptian premier highlighted an agreement by the joint ministerial committee to develop food security through different agricultural projects in Sudan.

"The first strategic project for us is meat production and ethanol production. We will also have a contractual partnership in the Gezira scheme," he said, referring to Sudan's vast but neglected farming project on land between the Blue and White Nile, south of Khartoum.

Sudanese officials said that 41,000 feddan (17,000 hectares) of land in White Nile state had been set aside for the meat project.

Egypt is particularly nervous about the future of its vital water supplies, which it fears could be dangerously reduced if upstream countries are able to divert the Nile river's flow without multilateral consultation, and is therefore keen to develop closer ties with south Sudan.

Radi, the cabinet spokesman said Egypt wanted to help Africa's newest nation-to-be, which voted to secede from the north in a landmark referendum in January, and was already developing electricity and education projects in the impoverished region.

Sharaf met with Sudanese Vice-President Ali Osman Mohamed Taha in the Friendship Hall in Khartoum and inked nine agreements and memorandums of understanding, included a cooperation agreement between the Social Insurance Fund in Egypt and the Sudanese Chamber of Zakat (alms) and Development, as well as a framework agreement between Cairo University and the Sudanese Ministry of Higher Educations regarding the return of the mission of Cairo University-Khartoum Branch to operate in Sudan.

The two sides also singed two memorandums of understanding in the fields of administrative reforms and exchange of banking information and data.

The Egyptian prime minister said during the talks that it is important to double the volume of bilateral trade which stood at 622 million U.S. dollars in 2010.

He expressed hope that the Egyptian investments in Sudan would rise from the current figure of five billion dollars.

Egypt is the third largest investor in Sudan, Sharaf said, urging the Egyptian private sector to enter into joint investments in Sudan and expand fields of cooperation.

Sudanese Vice President Ali Osman Mohamed Taha, for his part, said that Sudan and Egypt would focus in the coming period on food security projects, and working to establish companies in the vital fields, particularly "wheat, oil, sugar and meat" to achieve self- sufficiency of these strategic crops.

Meanwhile, Egyptian Minister of International Cooperation and Planning Fayza Naga cited a number of barriers hampering the flow of commercial exchanges between the two countries, including the certificates of origins and transport.

Fayza Naga urged the Sudanese authorities to exempt the Egyptian companies operating in field of exportation from the Value Added Tax (VAT), resolve the problem of air transport, particularly regarding entry of the Egyptian aviation into the Sudanese air space, and activate the freedom of ownership for the Egyptians in Sudan.

Regarding the Nile water which concerns both Sudanese and Egyptian government, Egyptian Minister of Water Resources and Irrigation Hussein al-Atfy held separate talks with his Sudanese counterpart Kamal Ali Mohamed.

Al-Atfy told reporters that his talks with his Sudanese counterpart reviewed the important role of the joint committee for developing the joint higher authority for the Nile.