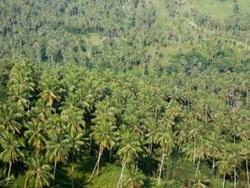 Indonesia's move to bring in a two-year moratorium on new palm oil plantations to protect its remaining rainforests has seen agribusiness giants like Sime Darby switch expansion plans to Cameroon, Ghana and Liberia.

The sudden upsurge in land deals by palm oil companies in Africa could lead to large-scale deforestation and loss of farmland by local communities, NGOs and environmental groups in Africa have told the Ecologist.

The world's largest palm oil producer Indonesia is due to implement a two-year ban on granting new concessions of land to plantation companies in forest areas. There are also restrictions on the availability of land in Malaysia. This has led companies like Sime Darby, which has more than half a million hectares of palm oil in Indonesia and Malaysia, to look elsewhere.

Sime Darby - reported to be the largest palm oil producer in the world - has leased 220,000 hectares of land in Liberia and is considering buying a further 300,000 hectares for palm oil plantations in Cameroon. Despite the Indonesian ban, it still wants to acquire 1 million hectares of plantation land worldwide by 2015. Other rival palm oil giants like Sinar Mar, Olam International and Wilmar International are also tying up land deals in Liberia, Gabon and Ghana.

For Sime Darby at least, the ambition is to target the lucrative European markets, particularly for biofuels. It recently announced plans to build a processing plant in the South of France, bringing palm oil from its new plantations in Liberia.

However, Friends of the Earth say at least two of the areas in Liberia - Gbarpolu and Bong - where the company has leased land are currently heavily forested and include virgin rainforest.

In Cameroon, campaigners have admitted to having strong reservations about Sime Darby's plans to lease land for palm oil plantations. Samuel Nguiffo, from the Centre for Environment and Development (CED), says even if they only develop on degraded forest, the deal is likely to involve farmland being taken away from local communities.

'Degraded natural forests are located next to villages, and are considered as traditional land and "reserve" for the future expansion of communities' farmland. But according to the State law (which prevails), the State owns part of the land, and is cutodian of the rest of the land. The malaysian company [Sime Darby] will therefore enter a deal with the State, and not with the communities, but will be taking what is still considered by the communities as their traditional land, according to their customs,' he says.

Nguiffo believes the land has more value in terms of sustaining local livelihood but says the government will push hard for a deal, regardless of the long-term consequences for the country's food security. 'The purpose of this company will be to use the land in Cameroon to produce crops for exports, while Cameroon has still not conquered its food sovereignety.

'If the policies are established to promote the development of food crops in Cameroon, land scarcity will quickly exacerbate. The hunger crisis in 2008 in Cameroon showed what the future could look like if we don't collectively consider as an urgent matter the need to give the priority to regaining our food sovereignety over promoting land concessions to foreign companies,' he says.

The UN's special rapporteur for right to food Oliver De Schutter says companies were 'filling the void' from a lack of government investment in agriculture in Africa. He also expressed concerns that the continent was being seen as a 'easy target' for cheap land deals. 'At the moment they [Cameroon and others] are competing to attract investments and so give as good a deal as possible and have a poor bargaining positions that don't bring rural investments.'

This was backed up by a report into land grabbing in Africa from the International Institute for Environment and Development (IIED) in February 2011. It found agribusinesses as well as government agencies and investment funds were acquiring long-term rights to large areas of land and in some cases priority rights over water in exchange for little public revenue and vague promises of investment and jobs.

It said local people were also often excluded from any deals. 'Land deal negotiations are unfolding fast and behind closed doors' the gap between legality (whereby the government may formally own the land and freely allocate it to investors) and legitimacy (whereby local people feel the land they have used for generations is theirs) exposes local groups to the risk of dispossession and investors to that of contestation.'