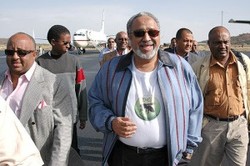 Saudi Star Agricultural Development Plc, a food company owned by billionaire Sheikh Mohammed al- Amoudi (above), says it has a 10,000 ha lease in Gambela, ethiopia and that it has obtained a lease for another 130,000 ha in the region, and plans to obtain a further 160,000 ha.

The company, based in Addis Ababa, leased 10,000 hectares (24,711 acres) in Ethiopia’s western Gambella region for 60 years at a cost of 158 birr ($9.42) per hectare annually, Chief Executive Officer Haile Assegide said in an interview on March 18. It plans to rent an additional 290,000 hectares from the government, he said.

The project forms part of the Horn of Africa nation’s plan to lease 3 million hectares, an area about the size of Belgium, to private investors over the next 2 ½ years. Critics including GRAIN, the Barcelona-based advocacy group, have argued that domestic farmers are being dispossessed and the country shouldn’t rent land cheaply to foreign investors to grow cash crops when about 13 percent of its approximately 80 million people still rely on food aid.

“There is lots of land in Ethiopia, especially in the lowland areas,” Haile said. “So, if you develop this lowland area and make Ethiopia self-sufficient in food, I see no problem.”

The Agriculture Ministry announced in November it plans to relocate 45,000 households, or about three-quarters of the population of Gambella, by mid-2013. Almost half of the region’s population is made up of the semi-nomadic Lou Nuer people, according to the 2007 Population and Housing Census.

The government says the so-called villagization program is aimed at improving public-service delivery and is not linked to investments in land.

“Where we have leased, there is no settler,” Haile said. “In the future, there might be some resettlement.”

When previous projects of Saudi Star’s parent company, Midroc Ethiopia Plc, have displaced people, it has compensated people, resettled them and provided public services including schools, health clinics and loans, according to Haile.

Over the past 15 months, Saudi Star spent $140 million buying equipment, clearing part of the land in Gambella and developing a 25-hectare trial plot, he said. Another 130,000 hectares has been allocated and there are plans to lease a further 160,000, Haile said. Ethiopia, Africa’s second-most populous nation with about 83 million people, bars private land ownership.

Other crops including sunflowers and corn will be grown in areas not suitable for rice, Haile said.

Two-thirds of the food produced will be exported by Saudi Star, with Saudi Arabia likely to be a “very dominant” market, while the rest will be sold domestically, according to Haile. This month, the Ethiopian Foreign Ministry said the agreement with Saudi Star required the company to sell 40 percent domestically, while 60 percent could be shipped offshore.

“There is no government policy to my knowledge,” Haile said.

Saudi Star’s farm will eventually produce as much as 1.5 million metric tons of rice a year and directly employ 250,000 people, in part because of a strategy to reduce mechanization.

Saudi Arabian businesses invested more than any other country in Ethiopia over the past five years, the Ethiopian News Agency reported in December. Ethiopia plans to attract foreign and domestic investment of 703 billion birr over the next five years, according to the agency.

Al-Amoudi, 66, is the world’s 63rd richest person and the second-wealthiest in Saudi Arabia with assets worth $12.3 billion, according to Forbes magazine’s annual global ranking of billionaires.