Is palm oil a kernel of development for African countries like Liberia? 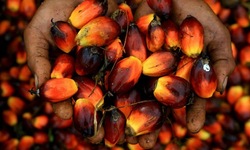 About 40km west of Monrovia, the capital of Liberia, in Grand Cape Mount county, a massive billboard proudly announces the arrival of the Malaysian palm-oil conglomerate: "Sime Darby, developing sustainable futures". In the middle of a recently cleared plot of land women are sowing palm seeds imported from Malaysia in little plastic packets.

This relatively small nursery is one of the first stepping stones in a project that might turn Liberia into a top source of palm oil. "There was just degraded forest here," one of the plantation managers, Zulkifli Isa, carefully explains. "We cleared it a year ago and we'll plant the young shoots in a year. Then we'll have to wait three years for the first crop."

In August 2009, Sime Darby signed a contract with the Liberian government for a 220,000-hectare concession lasting 63 years. More than three-quarters of this area will be given over to oil palms, the rest being set aside for the restoration of old rubber plantations abandoned during the civil war, from 1989 to 2003.

The contract marks the return of Malaysian business to Liberia. In Grand Cape Mount, Sime Darby has taken over land once farmed by Guthrie, the Malaysian company that controlled the country's second-largest rubber plantation before the conflict. But the present project is on an unprecedented scale. The small producers, who currently cater for local demand, only occupy a few thousand hectares. At the height of its activity, in the 1970s, the palm-oil industry extended over no more than 70,000 hectares, much less than what is now planned.

With this new development in Africa, which represents an $800m investment, Sime Darby aims to grab a share of the sub-Saharan market. But that is not all. The global market leader, constantly on the lookout for more arable land, aims to build a bridgehead to attack the European market. "Liberia is a very small market. We shall produce to meet domestic demand, but we also want to develop exports to Europe," Isa says.

To win the contract Sime Darby sweetened its bid with a list of community benefits, undertaking to build five primary and secondary schools with free education for the children of its workforce, to rehabilitate a hospital, with better access to treatment, subsidise half the price of rice and more. The multinational has promised to create 20,000 jobs and to provide technical assistance for small farmers. "We want to act as a catalyst for Liberia's development," Isa says. "People here want to work and there are plenty of them. But we are starting from scratch and first need to train them."

Over the past few months, however, criticism of working conditions and low wages has been swelling. Workers are paid $3 a day, the minimum wage paid by the government to officials. At the beginning of January a group of Grand Cape Mount residents signed a petition condemning illegal clearance of their land and several subsequent cases of water pollution. Many villages are located on land covered by the concession, with their own farm and woodland perimeters. Sime Darby's vice-president, Franki Anthony Dass, rejected criticism: "Sime Darby Plantation is a responsible player in the industry, committed to sustainable development and our venture into Africa allows us to introduce our best practices in a region where we are starting fresh."

Under pressure in Indonesia and Malaysia for their part in deforestation, the options in Asia for leading players in the palm-oil industry are increasingly limited. So they are turning their attention to Africa, where some countries are keen to cash in on one of the world's most profitable agro-industries.