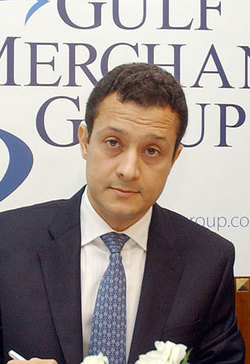 
Gulf Merchant Bank Limited (GMB) has participated in the "Salon Halieutis" trade show, held this week in Agadir in the Kingdom of Morocco, under the Royal Patronage of His Majesty King Mohammed VI and at the initiative of the Ministry of Agriculture and Marine Fisheries.

At the event, Mr. Nabil Maaloul, Chairman and CEO of GMB announced the signature of an initial aquaculture project in the Kingdom of Morocco and the intention to launch a private equity fund focused on investment in the aquaculture industry, mainly in the Kingdom.

GMB is working in collaboration with the Ministry of Agriculture and Marine Fisheries and with the National Halieutic Research Institute (INRH) in Morocco, the scientific body in charge of the rationalization of the management and development of the fisheries and aquaculture resources.

The first concession acquired through MAC is focused on the farming, transformation and commercialization of shellfish; mussels are the primary focus, but production of oysters as well as scallops is underway.

MAC operates in the northern Moroccan territorial waters in M'diq Bay at the Mediterranean Sea, and planning to export to the European markets where demand for fresh products continues to grow. The concession is over 400 hectares, allowing increased scales of production, and following the necessary investment production is expected to be approximately 9,000 tonnes of shellfish per annum.

"The support from the Government of Morocco for the Salon Halieutis Trade Show indicates the commitment in the Kingdom to attracting investment in the aquaculture industry. We see significant opportunity, with the ideal environment for large-scale production, historic under-investment and under-utilisation of resources and the growing European market leading to continuing increased demand. Therefore we are delighted to be working with the Government and key organizations such as INRH, in helping to rejuvenate the aquaculture industry. It has the potential to generate significant employment and support GDP growth," said Nabil Maaloul, Chairman and CEO of GMB.

Mrs Zakia Driouich, Director in charge of the Marine Fisheries and Aquaculture, added: "We are delighted about working with Gulf Merchant Bank as we seek to attract investment in the aquaculture industry. The fundamentals are in place and by working with the private sector we see an opportunity for significant growth over the coming years in line with "Halieutis", the new Government of Morocco strategic plan for aquaculture."