Tajikistan agrees to allow Chinese farmers to till land 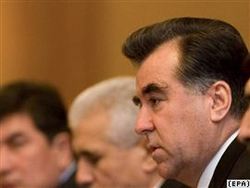 New guestworkers are coming to the cotton and rice fields of southern Tajikistan, and they are already sowing seeds of discontent.

Locals are outraged at the prospect of Chinese farmers arriving to work Tajik land, following Dushanbe's decision this week to lease out 2,000 hectares of land to the Uyghur Autonomous Region in western China.

That deal has added to simmering anger over the Tajik parliament decision just a week earlier to cede some 1,100 square kilometers of Tajik land (about 1 percent of the county's total land area) to China.

Many Tajiks, including this young man interviewed by RFE/RL's Tajik Service, reacted strongly to the decision.

"Why do they give land to China? There are no Tajiks [interested in it]? They do not give land to Tajiks. People live in desperate conditions.... They should give land to our poor people," he said.

The government has defended its decision, saying the mountainous and unpopulated land along Tajikistan's eastern border contains little of value, with no farmland, minerals, or other resources.

That hasn't stopped Tajiks like the this man from openly questioning the government.

"This trend has no good consequence,“ he said. “Today, Tajiks themselves are facing a land shortage. Look at Dushanbe and its suburbs, at how many people need land and are not happy with land distribution. The government should not ignore this."

The new land-lease deal, which will bring 1,500 Chinese farmers to work the fields in the Kumsangir and Bokhtar districts of southern Khatlon Province, is building on such sentiments.

The Tajik government, which has not said much publicly about the lease agreement, has reasons for taking this step. Tajikistan's unemployment situation is so dire that hundreds of thousands of migrant workers, most of them men, are driven to work in Russia. Some stay for part of the year, some for several years, some never return.

This leads to a shortage of manpower in rural areas, which results in some land being left fallow, as appears to be the case with the land the Chinese are coming to farm. According to Tilomurod Daniyarov of the Agricultural Ministry's international affairs department, the Chinese are promising to introduce drip-irrigation methods and other contemporary farming techniques to the regions and share their expertise and technology with neighboring Tajik communities.

Tajikistan is 93 percent mountainous, and not all of the remaining seven percent is arable. The vast majority of rice and cotton they grow is exported. Considering that food and staples are often scarce in Tajikistan, the thought that outsiders would be allowed to till their soil is highly unpopular.

Tajik sociologist Rustam Haidarov warns that the entry of Chinese farmers is only the first step toward something bigger.

"It is China's strategy to resettle its people in different countries. It's China's policy,” he said. “They occupy slowly, cautiously. They realize their own goals in Tajikistan and affect our economic policy. In time this will lead to an influence in politics."

Haidarov added that "where thousands of Tajiks have left to go to Russia, the Chinese will fill the vacuum. Some [Tajiks] even marry Chinese."

China has invested some $4 billion in Tajikistan in recent years, and is participating in a number of joint projects. But China for the most part sends its own workforce to implement such projects, meaning unemployed Tajik laborers get no relief.

Tajikistan's labor migration service says there were some 30,000 Chinese migrant laborers in Tajikistan in 2007, most working on roads, electricity substations, and at mining sites. There are claims that some Chinese workers do not return home when the project is completed. By 2010 they numbered some 82,000.

Some of the newcomers are merchants. By some accounts there are some 100 Chinese merchants selling goods at the main bazaar in Dushanbe and more are coming all the time. Other areas see a similar trend. Some Tajik merchants claim their Chinese rivals are provided with discounted wares in China so that they sell them at reduced prices that their Tajik counterparts cannot match. Once driven out of business, these homegrown merchants have little choice but to join the ranks of migrant laborers in Russia.

Tajik officials vow they will limit the number of Chinese farmers to 1,500, but they have not yet specified what exactly the country will receive in return for leasing its farmland.

Kazakhstan's president proposed a similar deal to China at the end of 2009, but it proved so unpopular that the idea was quickly dropped.

Tajikistan's president did not make any announcement prior to the recent land-lease deal, nor apparently did any other Tajik official, leaving the agreement to come as a surprise.

Iskander Aliev from RFE/RL's Tajik Service contributed to this article.