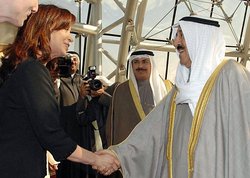 Kuwait's Emir Sheikh Sabah al-Ahmad al-Sabah welcomes Argentinian President Cristina Fernandez. The Argentines are presenting a total of 24 investment projects, including farm deals, during the tour, but no details are available.

KUWAIT CITY — Argentine President Cristina Kirchner on Sunday oversaw the signing in Kuwait of seven accords to boost cooperation with the oil-rich emirate at the start of a two-day visit.

Kirchner, on her first trip to the Gulf state, was greeted at the airport by Emir Sheikh Sabah al-Ahmad al-Sabah and other leaders, the official KUNA news agency said.

After the two leaders held official talks, the governments of the two countries signed the agreements on boosting cooperation in the fields of investments, agriculture and sports.

They also signed accords for cooperation in the fields of health, agriculture and sports.

The Argentine president heads a high-level delegation including Foreign Minister Hector Timerman, who said last week: "We need to open these markets."

Timerman has said his country was negotiating investment deals with Qatari and Kuwaiti funds.

The Argentine delegation is to present a total of 24 investment projects in the South American country during the tour, Timerman said without giving details.

Kirchner is to travel on to Qatar and visit Turkey on January 20-21.

Argentina has a large Arab community, mostly of Syrian-Lebanese descent, with an estimated three million immigrants from the region out of a 40-million population.