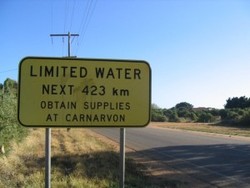 Australia risks ''selling off the dam'' as well as the farm.

Farmers are selling it and savvy investors are buying it, write Deborah Snow and Debra Jopson.

Tomorrow, savvy Australian businessman Richard Lourey will climb aboard a plane bound for Hong Kong to sell our water to the world. Not water in bottles. Farm water. He wants to bag $100 million from overseas investors in Asia, Europe and North America to buy up permanent water rights along the Murray-Darling Basin, one of the longest river systems in the world. He plans to lease it back annually to those who want it - and can afford to pay.

Lourey is one of the new breed of global investors who see fresh water as business - big business.

Another is John Dickerson, a former CIA analyst in San Diego, who set up one of the first funds in the world dedicated to acquiring water rights.

Dickerson's Australian subsidiary Summit Water Holdings bought up $20 million worth of our permanent rural water rights two years ago and is on the lookout for more.

As Dickerson puts it: ''You might remember the old Will Rogers saying, 'You ought to buy land because they ain't making any more of it'. He could have said the same thing about water.''

Unnoticed by most of us living in the big cities, fresh water in this country has become liquid gold. For many farmers caught at the height of the drought over the past three years, with failed or unsown crops and little ability to fatten stock, selling water rights got them through.

As investors watched, the federal government helped inflate the market 18 months ago by starting to ''buy back'' water for the environment. Canberra's spending spree accelerated after it struck a deal with the South Australian independent senator, Nick Xenophon, to purchase yet more water in return for his support for the stimulus package.

For stressed farmers who grabbed the opportunity to sell to the feds, it has been a wild ride. Once traded for a crate of beer, a decade ago rural water was worth as little as $2 a megalitre. Last year, at its peak, the average tender price for water rights ranged from $1300 to $2400 a megalitre. For many, water was worth more than their land.

Recent rain has coincided with a slowdown in the federal buying frenzy, and water prices (for now) have fallen by 20 to 40 per cent.

But water remains what many in the overseas investment world are calling ''blue gold''. Last year, more than $3 billion worth changed hands across the country as farmers sold water to each other, to the federal government, to super funds and to sophisticated investors at home and abroad. Increasingly, some inland towns are competing for rural water as well.

Few countries have comparable markets to ours, where water rights can be split off and sold separately from rural land. The US, Chile, Spain and Portugal are heading down this track, with limited experiments in China and South Africa. But nowhere does the market operate as freely as it does here. Ironically, this dry continent has developed the largest and most advanced water market in the world.

''When the rest of the world looks at us, they do see Australia out in front,'' says Deborah Kerr, natural resource manager of the National Farmers' Federation.

Admirers of the system say it helps re-allocate water to the highest value users.

''Trading has given irrigators and other water users much-needed flexibility in adjusting to economic and climatic pressures,'' says the National Water Commission boss, Ken Matthews. The commission believes water trading boosted national productivity by $220 million in 2008-09.

But others worry it will ultimately exact a toll on small-scale farmers and rural communities, by allowing big players to build up concentrated water holdings and play the market. Australia, they say, risks ''selling off the dam'' as well as the farm.

''Essentially, buying water now operates like the sharemarket,'' says Kellie Tranter, a Maitland lawyer and commentator. ''In the driest inhabited continent on the planet, with drought conditions exacerbated by climate change, the only way for the price to go is up. Those who can afford to pay for the water will have the luxury of it.''

Andrew Gregson of the NSW Irrigators' Council says his members are generally in favour of the market but he has concerns about how big players might manipulate their stakes.

''It's not that we have a problem with foreign ownership [of water] per se. It's a matter of market dominance.''

He is concerned that in an era when many countries are starting to worry about food security, foreign agribusiness might buy into the rural water market here and use permanent water holdings to dictate how our farmland should be used.

A foreign city state could, he says, ''buy a truckload of water and decide: 'I'm going to lease it to somebody, but as part of that lease I'm going to tell them what to grow, when to grow it, who to sell it to and at what price'. We're opening the door to potentially becoming the old feudal system of peasant farmers - on an enormous commercial scale, obviously.''

Gregson wants the Foreign Investment Review Board to track foreign water purchases as closely as it does overseas investment in real estate.

The Fair Water Use Australia group in South Australia is against the very existence of a water market, questioning whether it was constitutionally legal in the first place to ''unbundle'' title to land and water and then to allow individuals and corporations to turn a dollar from a liquid that is one of the basics of life.

''Initially, these water rights were established with no electoral mandate … We've got to protect what is ours before it defaults to being totally privatised,'' says the group's national co-ordinator, Ian Douglas.

A few simple but startling numbers explain why water is soaring in value here and around the world. A tiny fraction (0.3 per cent) of the planet's fresh water is easily accessible in lakes and rivers, and on some estimates, two thirds of the world's population will be suffering water stress by 2025.

Climate change, population growth and pollution will add to the competition.

Little wonder the former head of the United Nations Millennium Project, Professor Jeffrey Sachs, warned recently that ''the world is running out of water''.

Here in southern Australia, despite the recent rains, the medium- to long-term news is likely to get worse. US and German scientists monitoring the health of the planet from satellites delivered grim news last year.

Their joint project, dubbed GRACE (Gravity Recovery and Climate Experiment) showed a loss of 200 cubic kilometres of water in the Murray-Darling Basin between 2002 and 2009 - equivalent to 400 Sydney Harbours.

But hard-pressed farmers and irrigators don't need images from space to tell them what has been happening before their eyes.

Many of them remain sceptical about man-made climate change. But drought coupled with the gross overallocation of irrigation permits has drained the vast Basin - the nation's foodbowl - faster than it can replenish.

In the decade to 2007, the amount of water flowing into the Murray was half the long-term average for preceding decades.

With climate scientists predicting less rainfall in the area in coming years, inflows could decline by as much as 30 per cent relative to long-term averages. Professor Quentin Grafton, a water markets specialist at the Australian National University, says what we now perceive as extreme drought could become much more regular in the southern Basin by 2030.

These types of predictions ensure price rises will be inevitable. Those who hold rights to fresh water be will be tomorrow's kings and queens of the global monopoly board.

The release of the long-awaited draft Murray-Darling Basin plan will also affect prices. It is expected to recommend deep cuts to agricultural water being extracted from the Basin, in a desperate attempt to salvage the riverine environment.

The two main parties indicate they will buy back water licences on the open market rather than impose across-the-board cuts.

But farming communities say removing too much water from productive use will hollow out their communities.

''There is a sense of dread about what is coming with the plan,'' says the National Farmers' Federation's Laurie Arthur. ''People are living in country towns that are nigh on knackered already.''

Ian Shippen, an irrigation farmer who is part of a group of southern NSW farmers who have been embroiled in a long, painful sales negotiation with the federal government to shut down an entire water channel, has committed to staying.

Determined to use the buyback to help survive the imminent Basin plan, he is preparing for the day when the canal to his sheep property runs dry by growing saltbush as a waterwise pasture.

''There have to be some radical changes going on here,'' he says. ''I think we don't get a lot of credit, but there is a realisation among irrigation farmers that we've got to change and we've got to do things differently.''

Meanwhile, sophisticated investors like Summit Global, shaping up to be winners, are already factoring in how the Basin plan might affect their bottom line.

The answer, most likely, is an eventual bonanza for those who can afford to accumulate and hold water rights long term.

Graham Dooley, who chairs the Australian arm of Dickerson's operations, believes the savvy strategy is to hang on to water and not let it go.

He will not reveal exactly how much more the company is planning to invest in Australia or where, saying, ''our investors are intensely private''.