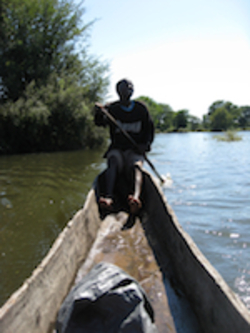 Developing agriculture along the pristine Okavango River must be carefully managed if water quality and quantity are to be protected. (Credit: Servaas van den Bosch/IPS)

WINDHOEK, May 18, 2010 (IPS) - A proposed irrigation scheme promises greater food security for Namibia, but should the 10,000 hectare Katondo Farm Project be completed, it could threaten the health of the Okavango River.

Thihako Mukena paddles his mokoro slowly across a soccer field, pointing with a smile towards the goalposts that barely clear the water's surface. Heavy rains in Angola months earlier have meandered down the Okavango to his doorstep: the river is at its highest point in nearly fifty years. His house is now cut off from the mainland, and 18-year-old Mukena navigates his way to school in the dugout canoe.

"The Okavango is one of the most pristine rivers in the world," says Maria Amakali, Acting Director of Water Resource Management in the Ministry of Agriculture, Water and Forestry (MAWF) in Windhoek. "The water quality is excellent due to a lack of development upstream in post-conflict Angola, but this might not last forever."

A proposed 10,000 hectare irrigation scheme, situated in a national park just below the confluence of the Cubango and Cuito tributaries, has raised eyebrows among environmentalists and water officials.

The scoping report by environmental consultants Enviro Dynamics highlights water as a possible deal-breaker. "The project will impact on an international water ecosystem with various role-players, stakeholders and regulatory constraints. The potential impact will be in terms of the water demand proportion and water pollution," write the assessors.

Current irrigation projects on the Namibian stretch of the river total 2,612 hectares. According to Ministry officials cited in the report, the maximum abstraction rate in the Okavango is 20.5 cubic metres per second, of this 3.32 cubic m/s is already used.

"Our abstraction is below what is permitted," maintains LIH CEO Cleophas Mutjavikua.

"The proposed abstraction is within the margins," concedes Norman van Zyl of Enviro Dynamics, "but it is a large amount that will have an effect downstream."

Despite the effect the abstraction might have on the Okavango Delta and the Makgadikgadi Salt Pan, the largest protected area in Southern Africa under the Ramsar Convention on Wetlands, controlling bodies contacted by IPS had not been alerted to the project.

"OKACOM has never, never been formally informed or requested to provide an opinion about the farm irrigation project," says Ebenezer Chonguica, Executive Secretary of the Okavango Commission (OKACOM) in Maun, which has a coordinating role in sustainable management of the river.

"Local businessmen make deals with foreign investors and convince tribal authorities in the area to give them land, but the water from the river is not just for people to take," says Water Affairs Under Secretary Abraham Nehemia who had also not been informed about the farm.

"Applications are judged by size and benefits that are accrued. If the quota is excessive it will not be approved. This particular project seems impossible."

According to MAWF engineer Piet Liebenberg, the Katondo farm might push water abstraction to its limits.

"There’s room to irrigate 16,000 hectares from the Okavango. Of this, 12,000 hectares would be situated below the confluence of the two rivers. Already 2,000 hectares are being planned there. It’s unlikely the Ministry will allocate the remaining 10,000 hectares to one developer."

But the Ministry’s calculations are based on a usage of 15,000 cubic meters per hectare per year while Katondo proposes to use half of that to grow maize, wheat, rice and canola - all water intensive species.

"Unrealistic," says Liebenberg. "Rainfall statistics suggest it’s not necessary to irrigate in summer, but because of the distribution throughout the season and poor water retention in the soil, it’s unlikely you would yield more than a tonne of maize per hectare. You have to irrigate all year round otherwise it’s not feasible."

Water quality could be affected

Environmental researcher John Mendelsohn, who has written several books about the Okavango, points out that pollutants are another concern. "Run-off from fertiliser and pesticides from this project could potentially have a significant negative impact downstream."

But it’s not just Katondo that has stakeholders worried. "If Angola’s dream of putting 600,000 hectares under irrigation ever becomes reality, not a drop of water will reach Namibia, let alone the delta," says Liebenberg.

"There will be a cumulative impact of such projects hammering the river," says Mendelsohn. "Yet an overall vision on the Okavango River Basin is lacking. Namibia simply sees it as a resource that can be harvested."

This might change later when a Transboundary Diagnostic Analysis looking at the impacts of potential future water use is presented in Gaborone on 25 May.

"This will see OKACOM becoming the leading authority in approving projects in the riparian states. Only after water for human consumption and the environment has been safeguarded, will agriculture be considered," says Nehemia.

"But we are moving away from establishing strict water quotas and looking at benefit sharing instead. How does tourism in the Okavango Delta benefit the region? Does it make more sense to water a farm with fertile soils in Angola, or an irrigation scheme in the Kalahari Desert?"