The World Bank in the hot seat 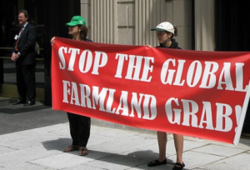 The World Bank in the hot seat

A curious thing happened last week. A lot of people were under the impression that the World Bank was going to release its long-awaited study on global land grabs at its annual land conference in Washington DC on 26 April 2010. This is what GRAIN was told. It's what many journalists were told. And it's what those involved in producing the study expected. But it didn't happen.

Instead, the Bank gave another powerpoint presentation summarising what the study will show, reiterated its proposed seven principles for "socially responsible" land grabs and unveiled its new business-to-business website – a kind of internet dating service to match up corporate land grabbers and government land givers.

This is not the first time that this study has been delayed. Indeed, ever since the Bank started compiling the data for it, tight political reins have been put on any public sharing of the results. They initially said the report would be out in December 2009. Then it was supposed to be March 2010. Then, we were assured, it would be released at the land conference last week. We do know that all of the research and analysis was completed long ago. So what's holding the Bank back?

The partial glimpse of the study presented in Washington last week sheds some light on an answer. The Bank initially wanted to do a comprehensive study of 30 countries, the hot spots for the land grabs. But it had to cut back severely on its expectations because, as it admits, the governments would not provide them with information. The corporations wouldn't talk either, we were told by people writing the country chapters. This in itself is a powerful statement that says volumes about the hush-hush nature of these deals. If the World Bank can't get access to the information, who can? Presentation of initial results of the World bank study during the panel, "Is there a global land rush?" at the World Bank Land Conference, April 26, 2010.

The Bank decided instead to base its study on the projects that have been reported by the media and captured on the farmlandgrab.org website. The Bank identified nearly 400 projects in 80 countries in this way, nearly one quarter (22%) of which are already being implemented. The study thus makes it plain that the global land grab is very real and moving along faster and further than many have assumed  (See box for a basic glimpse of what the study is expected to say.)

The Bank's most significant findings, however, are about the impacts of these projects on local communities. Its overwhelming conclusion, shared at the land conference last week, is that these projects are not providing benefits to local communities. Environmental impact assessments are rarely carried out, and people are routinely booted off their land, without consultation or compensation. The Bank even revealed that investors are deliberately targeting areas where there is “weak land governance”.

Mahendra Shah, Director of the Qatar National Food Security Programme, telling the World Bank he's worried there's too much talk and not enough action in identifying the land and getting the investments moving, World Bank Land Conference, Washington DC, 26 April 2010.

It is hard to see how, given these damning findings, the Bank could come up with anything positive to say about this new wave of foreign investment in farmland; this probably explains its reluctance to release the report. The Bank, after all, embarked on the study “to provide guidance to Bank clients (in government and the private sector) and partners who may be faced with or interested in large scale land acquisition so as to enable them to maximize the long-term benefits from such investments.”1 And, while its study waits in limbo, the Bank is becoming more and more committed to making the land grabs happen. European investors, for instance, say that they will be using the Bank's Multilateral Investment Guarantee Agency to provide them with political risk insurance for their farmland deals. Should anything backfire, “You’ll have the World Bank on your side,” says Gary Vaughan-Smith of London-based SilverStreet Capital LLP, which recently launched a US$300-million fund to invest in farmland in Africa. “They’re going to have enormous clout if there are any difficulties.”2

BOX: What the World Bank study is expected to say

[NB: GRAIN has not seen the World Bank's report. The following is drawn simply from publicly available documents, plus some verification from World Bank staff and consultants.]

The World Bank study focuses on large-scale farmland acquisitions of the last few years – what we all call land grabbing. While it largely confirms many things we already know, people have been awaiting the release of this report because the Bank was supposed to get access to more information than anyone else up to now. After all, most of these deals are shrouded in secrecy and controversy, and attract accusations of neocolonialism, even genocide.

The Bank inventorised 389 land deals in 80 countries. The bulk (37%) of the so-called investment projects are meant to produce food (crops and livestock), while biofuels come in second place (35%). Unsurprisingly, Africa is the target of half the land grab projects, followed by Asia, Latin America and Eastern Europe.

In terms of countries being approached for their land, the Bank reveals that, in Africa, Sudan comes in first place, followed by Ghana and Madagascar. In Asia–Pacific, Indonesia ranks first, followed by the Philippines and Australia. In Latin America, Brazil is the favoured destination, then Argentina and Paraguay. In terms of country of origin of the land grabbers, China and the UK tie in the top slot, followed by Saudi Arabia.

Finally, the Bank did statistical analysis of what draws land grabbers to certain countries rather than others – the "probability" factors. Three are particularly noteworthy: land availability, low mechanisation and weak land governance. This means that investors will prioritise places where: (a) it is relatively easy to get control over people's land; (b) large-scale holdings are possible; and (c) bringing in machinery will yield quick productivity gains. Bob St. Peter, a landless farmer from the US and member of the National Family Farm Coalition and La Via Campesina, poses a question to panelists from the World Bank at the Land Conference, World Bank, April 26, 2010.
Not winning anyone over

The problem for the Bank and the other land grab promoters, however, is that hardly anyone is fooled by talk of "win–win" guidelines or codes or principles to make it all work for everyone's benefit. No matter how hard they try, they can't shake the "land grab" label or stigma off these transactions.

"Here’s what I’m sure of", weighs in Howard Buffet, son of Warren Buffet, in an Oakland Institute report released in time for the Bank's conference last week. "These deals will make the rich richer and the poor poorer, creating clear winners who benefit while the losers are denied their livelihoods."3

If the Bank and its friends at partner UN agencies hoped that last week's events in Washington would finally give them some control over the land grab discussion, they were mistaken. More than 100 groups from more than 100 countries crashed their party by releasing a common declaration a few days before, which denounced their “seven principles” for socially responsible land grabbing. They didn't beat about the bush. As they see it, on the ground, this land grab is nothing but a massive transfer of lands from small food producers to foreign corporations, from sustainable farms to industrial plantations, and these groups were making it crystal clear that they are committed to throwing this trend into reverse. Against this, the Bank's "win–win", or responsible investment initiative, looks hollower than ever.

Reports and statements reflecting the social movement against the World Bank's proposals for "socially responsible" land grabbing are available at farmlandgrab.org: http://farmlandgrab.org/cat/world-bank

3 Oakland Institute, "(Mis)investment in agriculture: The role of the International Finance Corporation in the global land grab," 26 April 2010: http://farmlandgrab.org/12429