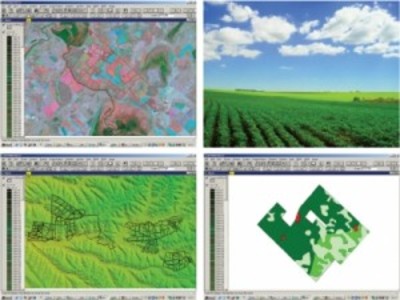 El Tejar's satellite mapping for the identification of farmlands

“We are also preparing ourselves so that Brazil is not our only option, and the option exists of doing it in New York,” he said in Buenos Aires. “We are preparing the company so as to be able to make the decision to go public whenever we decide.”

The company, which produces about 3 million tons of grains and oilseeds in South America, also operates in Uruguay, Paraguay and Bolivia and plans to start production in Colombia this year. About 40 percent of its total production comes from Brazil, where it grows mostly soybeans and corn.

Last year, Capital Group invested $150 million in El Tejar, becoming the second investment fund to buy a stake in the company. Hedge fund Altima is the largest stakeholder, with about 40 percent. The fund has about $2.3 billion under management, according to its Web site.

Capital Group holds about 13 percent of El Tejar’s shares, while a group of founding members of the company “has a little less than 40 percent,” Alvarado said. Capital Group was founded 80 years ago by Jonathan Bell Lovelace, an investor who built the firm in California after selling his 10 percent stake in a Detroit brokerage before the 1929 stock market crash, emerging with his fortune intact.

El Tejar is the biggest producer of wheat, barley and soybeans in Argentina, Alvarado said. In Brazil, the company plants about 170,000 hectares of soybeans and uses the same land to grow corn, he said.

Brazil and Argentina, the second- and third-largest producers of soybeans after the U.S., expect record crops this year. Brazil’s Agriculture Ministry on March 9 increased its domestic outlook for the oilseed harvest to 67.6 million metric tons, while the Buenos Aires Cereals Exchange last week forecast that Argentine soy growers will harvest 52 million tons.

Adecoagro, a George Soros-backed venture that invests in agriculture and renewable energy in Latin America, said last month it would consider an IPO to help fund projects in Brazil that include a $700 million sugar mill, according to Marcelo Vieira, a director for sugar and ethanol at the company.

Soybean futures have declined 8.3 percent this year on forecasts for record crops in Brazil and Argentina. Corn has fallen 12 percent as global inventories climb.

To contact the reporter on this story: Rodrigo Orihuela in Buenos Aires at [email protected]