The mothers of Malen 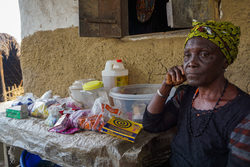 Hawa Koroma felt forced to lease her land to SAC in 2012. Now she survives by selling small items from a makeshift stall outside her home. (Image: Saidu Bah / China Dialogue)