Green deserts: The advance of oil palm plantations in the Amazonian state of Pará

Green deserts: The advance of oil palm plantations in the Amazonian state of Pará 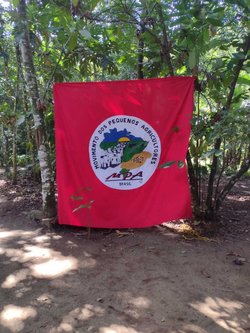 Violence in rural areas of the Amazonian state of Pará occurred systematically over the course of the 20th century in the name of a certain ‘national development’ of which the populations that inhabited this territory were not and are not a part. This ‘development’ continues its advance, in the process killing, poisoning and expelling local populations in a truculent fashion right now in the 21st century. In the lower Tocantins region, this violence presents itself via oil palm (dendê, as it is known in Brazil) monoculture, which arrived in the 1980s. Since its arrival, dendê and the companies that exploit its cultivation have had a trajectory of murder, labor crimes, human rights violations and various other forms of cruelty brought forth in the name of this ‘development’. And despite all this history of violence in peasant, quilombola and indigenous territories, the companies in question maintain that they produce ‘sustainable’ energy and palm oil.

Biopalma da Amazônia SA, a company belonging to the Vale corporation – one of the world’s largest mining concerns – in partnership with Grupo MSP, built its first mill to extract palm oil in 2012. The mill is in the municipality of Moju, 150km away from the Pará state capital, Belém. According to Vale, the total investment in the project amounted to US$ 500 million.

Biopalma was sold to BBF (Brasil BioFuels) in 2020. According to its website, BBF became Latin America’s top palm oil producer, and plans to expand oil palm plantations in the states of Roraima and Pará. (1) With the acquisition of Biopalma, BBF took control over an area of 63,000 hectares under cultivation, of which 7,000 hectares belonging to partner family farmers. BBF operates in all the stages of the production process, from the cultivation of dendê to electricity generation in thermo-electric power plants.

The purchase process was contested by a suit filed in Rio de Janeiro by a company called Marborges Agroindústria, interested in transparency vis-à-vis an act of business concentration. The company mentions in the suit that as ‘reported in the media’, BBF allegedly paid 1 real for Biopalma, despite Marborges having made an unsolicited proposal to pay 20 million reais (more than US$ 4 million), without the need for Vale to make any financial contribution and with the purchaser taking on all of the palm producer’s contingencies.

It was precisely during this period, in the midst of the pandemic, that this company, commanded by foreign investments, brought about an expansion in oil palm plantations, advancing onto areas belonging to peasant communities like Virgílio Serrão Sacramento located in the municipality of Moju, Pará.

According to the April 5, 2022 issue of O Liberal newspaper, BBF, “commanded by Milton Steagall, who is the defendant in dozens of lawsuits, both civil and criminal, has been the object of new accusations. The Federal Public Prosecution Service (MPF) points out a series of irregularities undertaken by BBF in areas that are part of traditional communities, like indigenous peoples and quilombolas, without the due legal licensing process for a company in the biodiesel business. Beyond the irregular activities, the company stands accused of environmental crimes, intimidation and violence against communities.” (2) According to the newspaper, the Prosecution Service highlighted the fact that, among other questions, the Turé Mariquita Indigenous Land is being strangled by the company’s plantations, without a buffer zone that should exist to keep a distance of at least 10km between the cultivated areas and the indigenous area. There have been several complaints of contamination. (3) The same situation afflicts two quilombola communities, also surrounded by oil palm plantations: Alto Acará and Nova Betel. According to the Federal Public Prosecution Service, “Both in the case of the Turé Mariquita Indigenous Land and of the quilombola communities, there are also areas bought up by the company that are in fact territories claimed by quilombolas and indigenous people”. (4) Along similar lines, in April 2022, the Bujaru and Concórdia quilombola communities, also located in Pará, denounced in an open letter the strong contamination and low water levels of the Bujaru River due to BBF and its operations. (5)

It was in this context that the peasants linked to the Small Farmers’ Movement (MPA) from Virgílio Serrão Sacramento community (Moju municipality), received a surprise visit on March 23, 2022. A marshal from the agrarian court in Castanhal municipality arrived to serve a preliminary injunction and writ of replevin filed against them by BBF.

Since the end of 2015, the families in question have occupied and lived in the area in peace and quiet, carrying out agricultural activities that respect the environment. Their income comes from the sale of what they produce, like cassava flour and derived products, Brazil nuts, açaí, palm hearts, cocoa, maize, beans, rice, passion fruit, black pepper, chickens, ducks and pigs. In other words, the land guarantees dignity and incomes for the 38 families that live in the community and work the land. The community hosts 13 cassava flour mills where flour is produced collectively. On average, each family produces thirty 60kg sacks of flour per month. The community also has a tree nursery that has produced more than 26,000 açaí saplings planted in the families’ fields, as well as 30,000 cocoa saplings. All the work is done collectively and with the farmers’ own resources.

The families that live in “Assentamento Virgílio Serrão Sacramento” community have a history of struggle for recognition of their land and of demanding that the Pará Lands Institute (ITERPA) inspect the area to go ahead with the regularization of land ownership in favor of the families. According to surveys conducted by the movement, there are no private property deeds for the area occupied, i.e., it is state of Pará public property. This history is borne out by photos, minutes of meetings and occupations of the headquarters of the National Colonization and Land Reform Institute (INCRA) and of ITERPA in Belém (Pará state capital city). The community’s families have always denounced the intimidation and threats made by employees of this plantations company, using drones and trucks circulating in the area. They always try to identify community leaders and to scare families into abandoning the area. For this reason, the movement and the families have always asked ITERPA to manifest itself, which had not happened until the start of the Covid-19 pandemic.

In December 2020, acting in a surreptitious and aggressive fashion, an employee of BioPalma (now BBF) entered the area by car with two security guards, taking photos of people, their homes and fields, and saying that the company owned the area and we should vacate it. This took place when we were experiencing one of the peaks of the pandemic, with several family members feeling ill and frail. It was in this context that the company sought a writ of replevin against the families.

The company uses lies as arguments in an attempt to incriminate the movement and the families that live in the community. They say we are in an area that belongs to them and claim we are committing environmental crimes like the illegal felling and extraction of wood. They also try to accuse us of threatening their employees with machetes.

All of these accusations and lies hurt our dignity, principles and values, for no such things have been done over the years. Never has anyone in the area been charged for this kind of act, a fact borne out by a document of the Brazilian Institute for the Environment and Renewable Natural Resources (IBAMA) annexed to the suit about deforestation in recent years in the area of the community. On the contrary, we have conducted various awareness-raising and environmental responsibility activities, with the planting of trees, including fruit-bearing trees, to recover the forest.

We repudiate the criminal and inhumane actions of this company, which has been grabbing land in the state of Pará, committing environmental crimes, violating labor rights and causing irreparable damage to the rivers, streams and springs of our region. (6)

Expansion of the oil palm in the Amazon region: more destruction and land grabbing

The area with oil palm plantations in Brazil has increased in size by some 60% over the last ten years. The largest share of this expansion is in Pará. According to a recent study by Chain Reaction Research, BBF, the biggest palm oil company in Brazil, controls 128,000 hectares of land. Its main customers include Bunge, Cargill, General Mills, Bimbo Group, Hershey, Kellogg’s, Mondelez, Nestlé and Unilever. Over the last few years, BBF was considered responsible for the deforestation of 667 hectares, despite the commitments made by industry and the authorities to expand oil palm plantations only in areas cleared prior to 2008. Most of these 667 hectares were deforested between 2019 and 2020. A peak of 165 fire alerts was detected in BBF’s oil palm plantations in 2020. (7)

BFF has almost 70,000 hectares planted in the states of Roraima and Pará, but there already exist areas mapped out in Rondônia, Amazonas and Ilha do Marajó (also in Pará), where cultivation plans have international funding guaranteed, according to BBF CEO Milton Steagall. (8)

In December 2021, BBF and Vibra Energia – Brazil’s largest biofuel distributor – announced plans to build a ‘green diesel’ refinery in Manaus, the capital city of Amazonas state. The Manaus refinery still lacks an environmental license, but the intention is to invest R$1.8 billion (US$378 million) and begin operations in 2025. In order to reach the necessary production volume, BBF plans to plant 120,000 hectares of oil palm plantations by 2026, in areas yet to be determined. This would increase the amount of land dedicated to this monoculture in Brazil by approximately 60%. (9) Vibra Energia, previously known as Petrobras Distribuidora SA, agreed to sell aviation fuel to be produced at BBF’s Manaus bio-refinery, which was already prepared to supply renewable diesel to the company. (10) Steagall has stated that the strategy is to cultivate oil palm in remote areas and transport the oil with the support of Vibra, which has experience in waterborne transport, another source of cost reductions. (11)

The expansion of oil palm plantations in the Brazilian Amazon by companies like BBF has been associated with disrespect for the rights of Indigenous Peoples and peasant and quilombola communities. Recent allegations include the contamination of rivers and soils, and damage to peoples’ subsistence and health. Numerous conflicts related to land rights have been documented. (12)

The families that live in the Assentamento Virgílio Serrão Sacramento community are living proof that there is a project underway to destroy the Amazon region, and that the justice system often remains blindfolded when crimes are committed by the powerful.

We will continue to fight for land, work and justice, and will not be intimidated by the powerful who try to kill us.