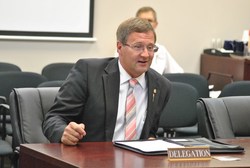 Athabasca-Barrhead-Westlock MLA Glenn van Dijken recently put forward a private member's bill that, if passed, would implement a prohibition on the purchase of farmland by pension plans and trust corporations.
RMO Today | 15 June 2022

Saskatchewan implemented similar prohibition back in 2015, prompting pension plans to look to Alberta to buy farmland.

ATHABASCA/BARRHEAD/WESTLOCK, Alta — While it did not make it as far as he hoped, Athabasca-Barrhead-Westlock MLA Glenn van Dijken hopes that a private member’s bill he introduced earlier this year will ultimately start a conversation around the potential hazards of allowing pension plans and trust corporations to own agricultural land.

It was then referred to the Standing Committee on Private Bills and Private Members’ Public Bills for review to determine if was ready to be debated in the Legislature.

In an interview on June 9, van Dijken said the bill was sent back to the Legislative Assembly where members were supposed to vote on a motion for concurrence. If that occurred, then the bill would move into a consultation phase overseen by the All-Party committee or a special committee.

However, time ran out in the last session, and there is a possibility that the next session (which starts at the end of October) could be prorogued, which would basically cause van Dijken’s bill to be dropped.

“There is still more work that we have to do, I believe, on ensuring good, thorough consultation. But at least the discussion has now started and it’s out front and centre now,” he said.

van Dijken said that over the past seven years he has served as an MLA, a number of constituents have approached him to express their concerns over pension plans purchasing agricultural land.

He said the issue has been on his radar since Saskatchewan moved to clamp down on the sale of farmland to pension funds roughly seven years ago.

Since then, he noted, the pension plans that were interested in buying up farmland have turned their attention to other provinces where agricultural land could be snapped up.

"That’s when we started to see more activity to start to show up in Alberta,” he said.

That last point is probably the biggest concern that people have, van Dijken indicated.

“What the people that have come to me have highlighted is their concern around the viability of the next generation going forward, but also what it could mean for the degradation of rural communities going forward.”

The thing about individual ownership of agricultural land, he explained, is that those owners tend to support their local communities and local businesses. However, the same can’t be said for, say, a pension plan manager operating out of Toronto, who has little stake in the continued viability of small communities in western Canada.

van Dijken said the very first person to approach him on this issue was from Sturgeon County, but he has heard similar concerns from constituents around Barrhead, Westlock, Athabasca and Woodlands County.

“It is a topic of conversation throughout my constituency,” he said.

He acknowledged he has also heard from some people who don’t think it is a big issue, but he believes “we have an obligation to identify something that could become a problem and to address it before it becomes a problem.”

Based on comments that were made online, the Barrhead Leader questioned van Dijken whether prohibiting pension plans from purchasing farmland was creating “red tape,” which the United Conservative Party (UCP) often cites as an economic barrier.

He pointed out that every purchase of agricultural land must be registered through the Alberta Land Titles Office, so it would create very little extra documentation or “red tape.”

He also pointed out there are prohibitions on ownership of agricultural land by foreign entities.

In any case, van Dijken believes it’s worth having a conversation about the benefits or pitfalls of allowing institutionalized ownership of agricultural land.

"The thing that probably concerns people the most is how rapidly it could change,” he said.

“If it was to accelerate and grow in a rapid manner, you could lose the ability to actually manage the social wellbeing of rural communities.”