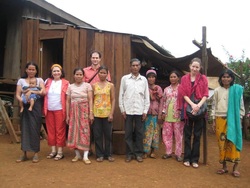 Sent by the International Federation for Human Rights, Noam Léandri (background) from Angers went to Cambodia in December 2010 to investigate land grabbing.

The Nanterre court's ruling on Friday 2 July sounded the death knell for the hopes of the Bunong ethnic group, by dismissing 80 Cambodian farmers' claims. It also brought back memories of Noam Léandri.

The secretary-general of the Ademe (Environment and Energy Management Agency), based in Angers (Maine-et-Loire), has several lives. He is now president of the Inequality Observatory (Observatoire des inégalités), after a hiatus to campaign for Matthieu Orphelin in the regional elections. In 2010, he was a member of the central committee of the Ligue des droits de l'Homme(Human Rights League) .

Sent by the International Federation for Human Rights (FIDH), along with a Canadian woman and a Tunisian woman, he flew to Cambodia in December. Objective ? “To take the most neutral look possible at a situation we were just learning about.” That is, an animist community in the highlands that were blaming a subsidiary of the Bolloré group and the Compagnie du Cambodge for robbing them of their ancestral forest, to replace it with rubber plantations.

“The government had decided to lease the land, believing that there was no title to it,” recalls Noam Léandri. “The villagers tried in vain to assert their rights locally through legal channels.” During his stay, he met the company, local authorities and the government. And he discovered the “sad spectacle” of queues of peasants waiting for “a few bucks” at the end of the day. “As they no longer have any land to cultivate, they are forced to work on the plantations.” The investigators' report pleads for people’s traditional way of life to be taken into account when economic interests come into play.

“Money is more important than people”

“We noticed the gap between the frugal life of the villagers and those who get rich in the city by allying themselves with multinationals, which are opaque complex structures,” sighs Noam Léandri. He is not surprised by the judgment handed down by the Nanterre court. “The damage will be measured over the long term. And Cambodian law goes along with the government's decision. As a result, these communities will disappear. Money is more important than people," he laments.