Cambodia. Standing up to Bolloré, the Bunong ethnic group mourns its forest

Cambodia. Standing up to Bolloré, the Bunong ethnic group mourns its forest 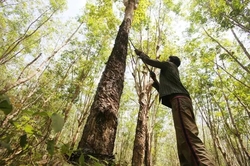 Les Bunongs, qui considèrent les arbres centenaires comme des divinités, s’estiment spoliés de leur forêt ancestrale epa . EPA/MAK REMISSA
It’s a hard blow for the Bunong indigenous community. Last Friday, 80 farmers from this animist group in the highlands of eastern Cambodia were dismissed by the Nanterre court. They were suing the Bolloré group and the Compagnie du Cambodge in a case of land grabbing in the eastern province of Mondolkiri.

The Bunongs, who consider century-old trees as deities, feel that they have been robbed of their ancestral forest, on which their traditional way of life depends and where their places of worship were located. It has disappeared to make way for rubber plantations. "Their expropriation has also deprived them of their means of subsistence," say their defenders.

The story began in 2008, when the Cambodian government granted nearly 7,000 hectares of economic concession to Socfin-KCD, a joint venture created a year earlier by a local company and the Luxembourg company SocfinAsia, itself a minority subsidiary of the Bolloré group.

The heart of the matter? Determining the ownership of these remote lands. Although the Bunongs -- some 37,000 people -- claim to have always lived there, they are having difficulty proving their rights, especially since most of the land documents were destroyed by the Khmer Rouge in the 1970s.

A legal action at the TGI of Nanterre

In July 2015, after several unsuccessful attempts to resolve this dispute in Cambodia, 51 Bunongs (there are now 80) filed a lawsuit with the Tribunal de Grande Instance de Nanterre. "The community no longer had confidence in the Cambodian judicial system," says Samin Ngach, who is in charge of the case at the CIYA, an association for the defense of indigenous people.

Six years later, the French court has just ruled that "none of the 80 plaintiffs [...] can justify a real or personal right to exploit the disputed land", in its words.

Bitterness in Cambodia. "We are very disappointed," laments Samin Ngach. "This decision is based on unjustified reasons, not taking into account the context of the country," said Sek Sophorn, counsel for the Bunong plaintiffs in Cambodia.

In France, the Bunongs' lawyer, Fiodor Rilov, has appealed the decision, which he considers "astonishing and out of step with international law for indigenous peoples."