The next big thing: H2O 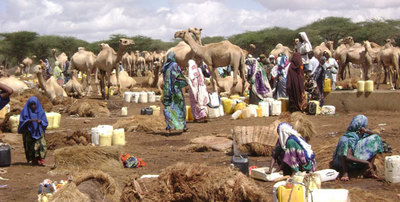 Water is the new gold, and a few savvy countries and companies are already banking on it.

As food prices skyrocketed over the last two years, countries and state-sponsored companies were quietly snapping up land around the world. Few noticed when South Korea began investing in farms in Madagascar, or when China, Japan, Libya, Egypt, and Persian Gulf countries acquired farmland in Laos, Cambodia, Burma, Mozambique, Uganda, Ethiopia, Brazil, Pakistan, Central Asia, and Russia. From what little has emerged publicly, the total land purchased since early 2007 adds up to at least twice the cereal cropland of Germany.

The purchases weren’t about land, but water. For with the land comes the right to withdraw the water linked to it, in most countries essentially a freebie that increasingly could be the most valuable part of the deal. Estimated on the basis of one crop per year, the land purchased represents 55 to 65 cubic kilometers of embedded freshwater, an amount equal to roughly 1½ times the water held by the Hoover Dam. And, because this water has no price, the investors can take it over virtually free. It’s not quite a scenario from a James Bond movie, but the rush to lock up scarce water resources in agricultural belts is nonetheless disturbing. It suggests another food crisis might not be too far away.

In a sense, the great water grab is only prudent: Some 70 percent of all freshwater withdrawn for human use goes into agriculture, but underground aquifers are falling—in some regions by several meters per year—and rivers are running dry due to overuse. The worst problems are in some of the world’s most important agricultural areas: eastern Spain, the U.S. Great Plains, the Middle East and North Africa, and parts of Pakistan, northwest India, and northeast China. As the former head of the International Water Management Institute warned, “We could be facing annual losses equivalent to the entire grain crops of India and the U.S. combined” if current trends hold.

We’d better figure out water policies that work, and fast. In some parts of the world, such as Oman, water is not free. Farmers must pay for the infrastructure or contribute work, and because water rights are tradable, water does have a price. Oman’s system has been sustainable for 4,500 years. Obviously, pricing and tradability have their limits: We also need to guarantee enough water for drinking and basic hygiene for those unable to pay, and set aside quotas for nature.

Market mechanisms at both the local level (tradable water rights) and the international level (multilateral free trade in agriculture) will have to be part of the solution. But we need to get moving before the steady drip of events becomes a torrent.

Peter Brabeck-Letmathe is chairman of Nestlé.