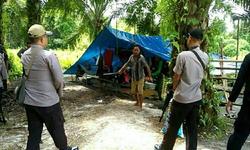 Indonesia, 9th January 2018: Indonesian NGOs have protested strongly to the Indonesian government authorities and RSPO about an incident they recorded on 18th December 2017, when police security forces shot and wounded two farmers. The shootings allegedly took place in one of Wilmar International’s oil palm plantations in Central Kalimantan in Indonesian Borneo.  According to the NGOs, the case relates to a land dispute between the local people and a wholly-owned Wilmar subsidiary, PT Bumi Sawit Kencana. The land conflict came to a head in 2013, when PT BSK tried to dig a canal which the community complained would block access to the disputed lands. The case was filed as a formal complaint with the RSPO in June 2016 but remains unresolved. The farmers claim that their lands were taken without payment or their consent. Wilmar is the world’s largest palm oil trading company.
The NGO coalition documenting the case has called on RSPO to investigate the recent incident and sanction the company for violations. They also call on the government to evaluate the company’s licences and sanction it for any violations and on the police to withdraw their mobile police brigade, which, they say, carried out the shooting. Typically, in Indonesia, mobile police brigades are deployed to protect companies’ properties in exchange for suitable payment by the company.
In their joint appeal the NGO coalition, which brings together indigenous organisations, community groups, farmers’, students’ and women’s associations, and environmental justice organisations from across the archipelago, noted: 'The state failed to be present to protect its citizens and instead let law enforcement becoming corporate shields. The state should be able to act justly, give a sense of security and fulfil people's right to live a prosperous life.'
Marcus Colchester, Senior Policy Advisor of the international human rights organisation, Forest Peoples Programme, which is also a member of RSPO, said: "The slow pace at which the RSPO is able to resolve complaints is becoming a major problem. It is tragic if the delays lead to escalation and serious human rights violations. There is a pressing need for RSPO to adopt measures to protect complainants, community spokespersons and those seeking to defend their rights."
Click here to read the NGO Statement