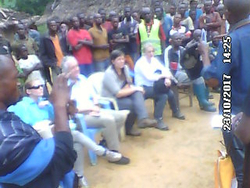 Community speaking to the Feronia delegation about their grievances (Photo: RIAO)
RIAO-RDC | 2 November 2017
Communiqué from RIAO DRC
Threats on Feronia’s plantations in the Democratic Republic of Congo (DRC)

A FERONIA delegation is currently visiting the DRC. There is growing concern surrounding this particular visit given the mistreatment of staff and members of our NGO have been subjected to.
Let us first recall that FERONIA, which has been occupying spaces and plantations that are vital to the Communities’  for many years, is currently undergoing financial difficulties as a result of poor internal management as well as many questionable aspects of its bookkeeping. FERONIA has decided to undertake a simulation of a Community Dialogue with the communities affected by its plantations. In the context of this initiative, FERONIA hired the Belgian consultancy firm INTERSOCIAL, who came into contact with our organisation, RIAO, asking to facilitate contact with the communities who had previously requested assistance, aid and support for all the violations they have suffered for many years and continue to suffer.
Thanks to the support received from administrative and political authorities, the FERONIA delegation has set out on a mission to various villages impacted by its activities. A delegation of 10 people visited Boteka, Yaligimba and Lokutu before returning to Kinshasa on the 1st of November 2017. In each of these villages, communities reiterated the requests they have had for many years, namely:
In order to bring their requests forward, the communities decided to organise a peaceful peoples’ march. This march was, unfortunately, disrupted by unscrupulous people in an attempt to discredit RIAO and its allies.
Yesterday morning, our local RIAO collaborators, together with collaborators of our ally ASBL CADAP, were summoned by Tshopo's province Vice-governor in Kisangani, Mr. Gaspard Bosenge Likoko. He ordered them to assuage the communities and help reduce the tensions in FERONIA's plantation areas. This kind of injunction casts suspicions on our colleagues and are intended to endanger their safety at the local level in our country. We thus denounce these actions. Furthermore, we have received word that a national security force battalion is en route to Lokutu to put pressure on the communities, in particular on traditional chiefs. They want community members and chiefs to sign the 'cahiers de charge' or social contracts, which they have always refused to sign basing their decision on the documents' unfair and abusive nature.
This armed force battalion is allegedly comprised of police officers and soldiers dressed as police officers who are  tasked to carry out a military operation to go after community members accused by the authorities of preventing FERONIA workers in Lokutu from continuing to work the land.
RIAO firmly condemns the death threats and intimidations against our members and collaborators. RIAO voices its concerns on the degrading treatment inflicted upon various communities in the Democratic Republic of Congo. RIAO extends its solidarity to these brave communities and calls upon national authorities and the international community to help to put an end to this climate of terror which is authorised and encouraged by FERONIA and its accomplices.
In Dakar, on 2 November 2017.
Original source: RIAO-RDC
TWITTER
FACEBOOK
WHATSAPP
PRINT
E-MAIL
TWITTER
FACEBOOK
WHATSAPP
E-MAIL