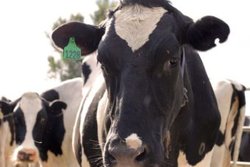 There has been strong demand for Australian dairy products in China. Photo: ABC News/Claire Moodie

One of Western Australia's most recognised household dairy names — the 130-year-old Brownes Dairy — has been sold to a Chinese firm.

The statement said the sale would mean the firm would have greater capacity to exploit export opportunities.

It said there would be no job losses, and the management teams would remain the same.

Mr Girgis said it was inevitable the dairy would be sold again, as the previous private equity owners were not long-term investors.

He said Shanghai Ground Food Tech had expanded quickly in recent years and was a significant supplier of liquid milk.

"They've got ambitions to grow into cheese — the next rapidly growing area in China at the moment — and if you follow the international news there's been a number of international players clamouring to get into supplying cheese to China," he said.

Brownes has been heavily criticised in recent months after issuing new contracts which meant farmers could be fined for undersupplying milk.

One farmer dumped thousands of litres of milk last year after Brownes cancelled his contract.

"That was unbelievable circumstances that we had last year, and we had to take action," he said.

Obviously with a change of ownership that brings up a different perspective to the business … it's too soon to say whether there's any impact on farm gate pricing.

"All I can say is that this provides surety for our suppliers going forward, that the business will be sustained for a long time and with the focus on growth it should provide them with opportunities to grow with us."

"Expansion of cheese manufacturing capabilities would be of significant benefit to the state's dairy industry and provide greater certainty for producers," he said.

"Particularly after what has been a difficult 18 months due to the lack of access into world markets and in balancing the state's dairy supply."

WA Agriculture and Food Minister Alannah MacTiernan said Brownes had been in a bit of a "no-man's land" for the last couple of years and hoped the sale — which is subject to approval from the Foreign Investment Review Board — would help change that.

"We're producing more milk than we need just for the fresh milk market but not enough to really stimulate a new export industry," she said.

"If we can get this company working in a really good relationship with our local farmers I think this can be a win-win."