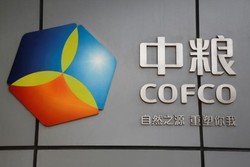 A group of state and private companies will invest a total of 6.9 billion yuan ($1.04 billion) in COFCO Capital, a subsidiary of state-run agribusiness COFCO Group, according to a notice published on Monday on a state investment platform.

COFCO is currently restructuring its business as part of wide-ranging reforms of China's state-owned companies.

Part of the overhaul includes introducing mixed ownership into its 18 subsidiaries and listing more of its divisions on public markets.

COFCO Capital's new shareholders include state-run investors such as the State-owned Enterprise Structural Adjustment Fund and Beijing Capital Agribusiness Group, as well as privately-owned Guangdong Wen's Foodstuff Group, according to the statement on the website of China Chengtong Group, a state investment platform that partly owns the State-owned Enterprise Structural Adjustment Fund.

That fund has injected 800 million yuan into COFCO Capital, according to the statement.

"This is a partnership of state and private sectors, agricultural and financial investors which will better serve COFCO's global agricultural supply chain," said the statement.