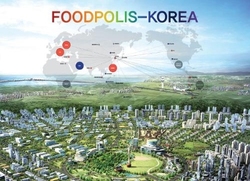 Foreign businesses, which build manufacturing facilities in Foodpolis, can lease land for up to 50 years by paying 1 percent of the site's value annually.
The government has designated part of the Korea National Food Cluster, or Foodpolis, as a foreign investment zone (FIZ), making it easier for the cluster to attract global food firms seeking to set up a base in Northeast Asia.

Under the relevant law, foreign companies can enjoy favorable land leases and tax breaks in the FIZ, and are entitled to a range of administrative and other state support.

About 116,000 square meters of Foodpolis had already been designated as an FIZ but the Ministry of Agriculture, Food and Rural Affairs, which administers the cluster, wants to expand it to 450,000 square meters to attract more non-Korean food firms.

Foreign businesses, which build manufacturing facilities in Foodpolis, can lease land for up to 50 years by paying 1 percent of the site's value annually. They are also required to make a one-time deposit equivalent to 5 percent of the land value.

"The FIZ is regarded as an additional incentive for foreign food firms to come and set up a plant in Foodpolis," an agency official said. "So far only two foreign companies have signed contracts to build plants and other facilities here. But the number will increase sharply by the end of the year."

Gold of Prague has decided to build a brewery on a 16,500 square-meter site inside the cluster to export beer to China and other Asian countries.

CoreBio, a joint venture between Korean and U.S. companies will construct a plant on a 23,140 square-meter parcel of land to produce fermented beverages.

In addition, 34 Korean food firms have also signed contracts to set up a presence in Foodpolis, 10 of which have already begun construction. The cluster wants to increase the number to 80 by the end of the year.

"We have held road shows in Canada, Hong Kong, China, Japan, Germany and other countries over the past year to inform foreign food firms about Foodpolis and the benefits of building a plant in the cluster," the official said. "We have also taken part in global food fairs to interact with manufacturers and research institutes, encouraging them to locate to Foodpolis, which will soon become a food research and manufacturing hub in Asia."

The government is investing 452 billion won to build the food industry complex on a 2.32 square-kilometer site in Iksan, North Jeolla Province, for both Korean and international companies aiming to export value-added, processed foods.

Foodpolis is projected to generate annual output worth $14 billion and create 22,000 new jobs by 2020 if it houses over 150 businesses and 10 research centers.