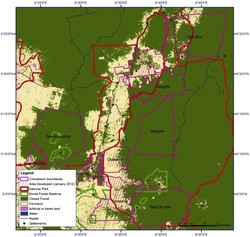 A corporation led by Africa’s richest man, which is already involved in the alleged illegal conversion of some of Nigeria’s few remaining areas of dense natural forest, has announced plans for a huge expansion of agricultural plantations in the country.

It is unclear how the company will be able to find an area more than three times the size of Greater London in one of Africa’s most densely populated countries without threatening Nigeria’s remaining natural forests. Only a limited area of southern Nigeria has a climate suitable for growing palm oil and sugarcane, and this is also the most densely settled part of the country. What unpopulated land does exist is mostly forested. It is very likely that much of the new investment will be targeted at Nigeria’s Cross River State, on the Cameroonian border. Cross River has retained more of its dense forest than any other state in Nigeria. Unfortunately, it is also one of Nigeria’s “premier agricultural investment destinations”.

Dangote’s companies already own some 15,000 hectares of ‘greenfield’ land in Cross River State, which they are developing into oil palm and pineapple plantations. Large swathes of this land overlap with the Cross River National Park, allegedly having been issued to the company by the authorities in breach of regulations. The Park encompasses one of the oldest rainforests in Africa, and is home to a range of endangered species including gorillas and chimpanzees. The 9000-hectare oil palm license issued to Dangote subsidiary Dansa Agro-Allied overlaps completely with the National Park (see image). Satellite images show it is made up entirely of virgin, closed-canopy tropical forest. As of 2013 the company was intending to convert the whole area by the end of 2018, though analysis of recent satellite images by Earthsight reveals activity has yet to start. Clearance has begun in the neighbouring pineapple plantation, however.

The allegedly illegal allocations of land to various companies in protected forest reserves and parks in Cross River State have attracted international attention for the involvement of global palm giant Wilmar. Dangote’s investments are arguably a greater threat, but have gone largely under the radar. In the Wilmar case, in addition to the overlap with protected forests, NGOs allege that the company failed to carry out adequate environmental impact surveys or secure the free, prior and informed consent of local forest-dependent communities.

The Dangote Group is already a major consumer of palm oil but has been pushing for some years to move upstream, including in Cross River. It has previously handed out thousands of palm oil seedlings and announced plans to construct a $200 million refinery in the state. Dangote is a controversial figure, who has been linked repeatedly with the use of offshore jurisdictions and banks. A leaked State Department cable alleged that he built his wealth through working with politicians to obtain exclusive rights over imports of sugar, cement and rice, something he flatly denies. Dangote is a major source of funding for the right-wing People’s Democratic Party, which ruled the country until 2015 and was in power when permits were granted to Dangote to develop oil palm and pineapple plantations in Cross River National Park.