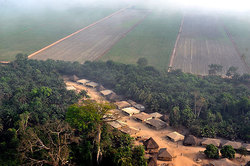 Aerial photo of the lands taken by Addax Bioenergy for its sugar cane plantation in Sierra Leone.
A land audit is certainly a must for this country, and it must include assessments of land ownership, plot size, vacant lots and spaces that are informally occupied, which should aim at producing a digitized database of survey findings in addition to standard records.

ALLAT National Coordinator, Abdulai Bom Wai, explains the controversy that has arisen between the people and foreign investors who claim the land they used for their production belongs to them, which calls the situation a ‘land grab’ by government.

“We are not against these investments but we want responsible ones. Land grabbing is in Sierra Leone. Most of these investors they are celebrating are engaged in land grabbing, and anywhere there is land grabbing there is conflict. They are doing it in connivance with government. The government go into these communities and pressure the Paramount Chiefs to take the land away from our people and they sub-lease it to these investors, which is bad,” he said.

The land does not belong to the government. It officially belongs to the people. “That is what they did at SOCFIN, ADDAX, Sierra Leone Agriculture in Portloko, that is not the process, I am happy the land policy has put forth the process of acquisition of land, all of these are the related conflict risks with large scale investors in the country,” said Bom Wai.

He said that there is need to look at the context in which these international organisations come to operate. “Majority of our population are in the rural areas over 50% are in the villages, and those people depend on agriculture for a significant share of their existence. Also, the agriculture we all know they say contribute around 50% towards our GDP, we can use our agriculture to effectively fight hunger and eradicate poverty.”

In the last five years, 30% of the arable land has gone to large-scale investors. “It is quite an amount of smallholders that have their land taken from them. Regrettably, many small holders have been removed from all those areas that have large scale investment, given the growth rate of our population in the next ten years, our population will double and therefore the pressure on land will even increase, and that will also give rise to a lot of smallholders.”

He warned of the risks that if we continue to allow too much large-scale investment. “It is good we are punishing our own people, we should not continue in this light” saying this is not the solution, “it is not until we sit and organize this aspect of investment.”

At the moment, it is disorganized. They lack transparency. Go to them and ask for the agreement they signed with the people – no one will give you, and if it lacks transparency then something is wrong somewhere; pollution, corruption, food insecurity are all part of these investments,” he said.
Ibrahim Massaquoi from Moyamba, said that there are serious issues with the land, especially the problem of rival ownership and this he said is created by the some Paramount Chiefs and heads of some households.

“We need ownership structures, rather than getting foreign investment, we need local ones too, communal ownership and farming does not encourage investment in the land, and so we need to improve local investment by individual holdings” he said.