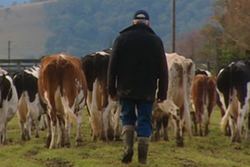 Foreign investment in Australia’s agricultural land hits $4.6b
by NATALIE KOTSIOS
Investment in Australia’s agricultural land has soared to $4.6 billion, with the bulk of that coming from the US.
American investors spent $1.3 billion buying Aussie farmland in 2015-16, with China hot on their heels with investments totalling $996 million.
The figures were revealed in the Foreign Investment ­Review Board’s annual report for 2015-16, released last week.
It shows investment in Aussie farms has jumped to $4.6 billion — almost double the $2.5 billion recorded in the previous year.
The increase was due to the Government lowering the FIRB’s agricultural land screening thresholds in March 2015, from $252 million to $15 million for agricultural land and $55 million for agribusinesses.
“Due to this change, around 110 proposals for agricultural land, valued at approximately $1.4 billion, were screened in 2015-16 that otherwise would not have been screened previously,” the report read.
China’s investments ­included the $280 million purchase of Tasmania’s Van Diemen’s Dairy.
The UK invested $338 million — well behind the US and China — to be the third-largest source country in 2015-16, followed by Singapore with $264 million.
CBRE regional director for agribusiness Danny Thomas said the figures were not surprising and expected the growth in agricultural investment to continue.
“We’re seen by the rest of the world as a politically stable environment, and with the ­exchange rates ... we look like good value,” Mr Thomas said.
He said CBRE had seen a slowdown in inquiries from mainland China but he expec­ted capital to continue coming from Hong Kong.
One to watch, however, was Canada, which invested $240 million for 2015-16.
“There’s a whole lot of pension funds, institutional investors that are used to investing in natural resources and agriculture on North and South America,” Mr Thomas said.
“It’s simply a natural extension of their investment programs that they’re now starting to look at Australia and New Zealand.”
The FIRB report showed there were 227 agricultural sector approvals — a fraction of the 41,445 approvals across all sectors, and accounting for just 2 per cent of the $247.9 billion investment across Australia.