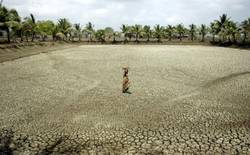 A worker walks through a dry fish pond in a field earmarked for a Special Economic Zone (SEZ) in Pen, about 70 km (43 miles) east of Mumbai in this 2009 archive photo. Photo by REUTERS/Punit Paranjpe
India's top court queries land use in special economic zones

By Suchitra Mohanty and Rina Chandran

India's Supreme Court has asked seven states why land bought for industry is lying idle, raising questions about the benefit of special economic zones amid rising conflict over land.

The zones have provoked controversy in India, which needs to create new economic opportunities for its fast-growing population. Hoping to imitate China's manufacturing success, India introduced the so-called SEZ Act in 2005, issuing hundreds of approvals. Now the results are coming under scrutiny.

This week, the top court sent notices to seven Indian states, giving them a month to respond to a petition by an advocacy group which says about 80 percent of land bought for SEZs in the past five years was unused - much of it agricultural land.

"We have issued notices to seven states on the plea of the petitioner," a bench headed by Chief Justice J.S. Khehar said.

Special economic zones (SEZs) offering tax incentives to companies have cropped up around the world in recent years, but the World Bank says they have had mixed success in boosting export earnings or economic growth.

In India, of the almost 5,000 hectares (12,355 acres) of land acquired for SEZs in the last five years, only 362 hectares have been used for their intended purpose, according to SEZ Farmers' Protection Welfare Association, which filed the petition.

"Farmers have been devastated by the loss of their land," said lawyer Colin Gonsalves, who is representing the group.

"Not only have they lost their land, they have also been denied alternate jobs as the promised industrialisation didn't take place," he told the Thomson Reuters Foundation.

"When we receive the notice, we will respond accordingly," said TV Ravi, a director with the industry ministry.

"We are not considering any changes to the policy as of now. If investors don't come, then we may rethink it," he said.

Conflicts over land have risen in India as demand grows for infrastructure projects to drive growth and boost development for its 1.3 billion citizens.

Farmers reluctant to give up land have clashed with state authorities, stalling major projects and putting billions of dollars of investment at risk, according to research published in November.

A 2013 report by the Indian government's auditor showed that only 62 percent of land for SEZs was used for its intended purpose of boosting manufacturing, exports and jobs. They generated less than 8 percent of jobs forecast, it said.

The report also found that in several SEZs, land has been denotified and sold to private developers for higher prices.

"There are a number of irregularities around SEZs, which have become speculative real estate deals for developers," said E.A.S Sarma, a land rights campaigner who has studied SEZs in the southern state of Andhra Pradesh.

"We need a review of all SEZs - if the land is not being used, it should be returned to its original owners," he said.