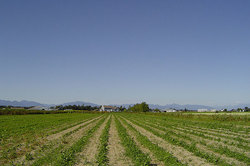 This comes in response to a Globe and Mail investigation that found new foreign and local buyers building mansions or applying to redevelop farmland around Vancouver, while enjoying extremely low property taxes meant to encourage farming.

A new report by Metro Vancouver is urging governments to eliminate those breaks for any owners who do not use their property to grow crops or produce livestock. The province said it is now looking into that.

“We have just received the report which recommends changes to rules,” said a spokesperson for Peter Fassbender, B.C.’s minister of community, sport and cultural development. “We will carefully review the report and comment further after we’ve concluded a thorough review.”

The Metro Vancouver report, published in September, calls for tax reforms for non-producing farms. The reforms include increased property assessments, getting rid of some tax exemptions, increasing the amount farms must produce to receive tax breaks, and imposing provincial limits on the size of houses that can be built within the Agricultural Land Reserve, where farmland is supposed to be protected.

“Agricultural land in Metro Vancouver is increasingly threatened from non-farm land uses,” states the paper, which was done by regional government planning staff after a three-year investigation.

As part of its ongoing probe into the real-estate market in B.C’s Lower Mainland, The Globe conducted a detailed analysis of 122 agricultural properties in suburban Vancouver that changed hands for more than $2-million apiece between August, 2015, and last July. Those results show that people who were not farmers were behind at least 73 – almost 60 per cent – of the purchases.

These farms sold for a total of $449-million, while the province pegs their taxable value at about one-tenth of that: $52-million. Under provincial law, the value of farmland is judged by how good the soil is, not what an investor will pay for it. As a result, the wealthy new investors – who are spending millions buying land and building mansions – are paying as little as $400 a year in property taxes.

“Many of the landowners in the ALR are using agricultural land for purposes other than farming, including residential, which occupies 48 per cent of the ALR land that is not used for farming,” the white paper states.

Specific proposals include eliminating the 50-per-cent school-tax exemption, which now applies to properties in the ALR, some of which are essentially luxurious residences. It also calls for an increase to the income the farm needs to produce, to be classified as a farm.

Another problem concerning planners is the ballooning size of houses on land in the ALR.

Richmond Mayor Malcolm Brodie raised concerns about the issue in letters to the provincial Agricultural Land Commission, which oversees the ALR, and to B.C. Agriculture Minister Norm Letnick this summer.

“In recent years, council has become concerned about a disturbing trend – that house sizes in the ALR have been increasing to the point where they are becoming too large and do not support agriculture viability,” Mr. Brodie wrote.

“These types of mega houses/buildings were never envisioned in the ALR, as they do not support agricultural viability and detract from achieving it,” said Mr. Brodie, who asked for provincial regulations to limit the maximum house size and house location on land in the ALR.

The Agriculture Minister said in a statement Sunday that the province gave municipalities the legal power to limit farmhouse sizes so it’s up to them to pass those bylaws.

David Connell, an associate professor at the University of Northern B.C. who has a research focus on farmland protection, said all levels of government need to work together to ensure agricultural land is both protected and productive.

He said tax changes would help, but more than that is needed.

“Without other actions, taxes aren’t enough of a deterrent,” he said. “The alienation of farmland through residential development, whether it’s through monster homes or whatever, has been occurring for a long time.”