Liberia: the growth of a new palm oil frontier 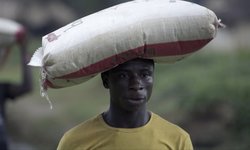 Liberia: the growth of a new palm oil frontier
by Clair MacDougall
With a sweat slicked forearm, Bacchus Wilson Panyonnoh hacks away the vines that snake over a young oil palm tree. He knows the rhythm of a whipping cutlass, the oppressive tropical heat that clings like a second skin and the dull sting of calloused hands well.
The 35-year-old comes from a long line of farmers and hunters from the remote forests of south-eastern Liberia. But instead of cutting back relentless jungle in search of farmland or bushmeat, Panyonnoh moves between rows of stout trees on what is set to become the largest palm plantation in Liberia.
Panyonnoh is one of more than 3,700 Liberians working for Golden Veroleum Liberia (GVL), a company whose main investor is one of the most powerful palm oil outfits in the world, Singapore-based Golden Agri-Resources.
“I do slashing on the field. I brush. I brush all day,” says Panyonnoh. “I’m happy because other people are looking for a job. They cannot get a job.”