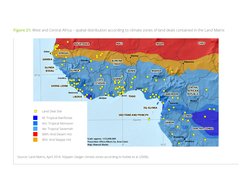 Analytical report of the Land Matrix II
International Land Deals for Agriculture:
Around the world, 26.7 million hectares of agricultural land have been transferred into the hands of foreign investors since the year 2000. This means that these investors possess approximately 2 per cent of the arable land worldwide, or roughly the equivalent to the total area covered by United Kingdom and Slovenia together. This finding comes from Land Matrix's newest report  "Land Matrix Analytical Report II: International Land Deals for Agriculture".
The report provides detailed information on who is buying up farmland in which regions of the world and how this land is being used. It also highlights the economic, social, and political impacts of land investments.
Download the report here:  Analytical Report of the Land Matrix II (2.2 MB)


Additional findings from the report: