The tentacles of Bollore-Socfin stretch far and wide 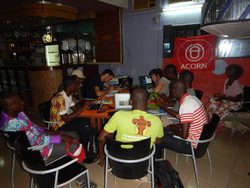 We listened carefully to two more reports from our delegation at the Organizers’ Forum about the land grabbing of Bollore-Socfin, the Paris and Brussels-based conglomerate. One was from two organizers from the Ivory Coast and the other was from an organizer in Cambodia who was on his way to our meetings, but turned back arbitrarily at the airport. The company’s strategy and colonialism became crystal clear.
In the Ivory Coast, Bollore in fact blinked in the negotiations over its expropriation of land, but then it spit. They had promised to rebuild the villages and provide other development aid when they expanded to 38000 hectares, but they had not done so after decades. They finally settled and came to an agreement with the villages where on a per hectare basis they agreed to pay 75 million francs per year to the more than 30 villages impacted adversely. Fine so far, but then, outside of the terms of the agreement, they created a middle-man, an association ostensibly with representation from each of the villages, which would receive the annual payments and approve them for the villages once a development program was submitted. The association’s leaders were pretty much hand-picked though and fairly quickly there were charges of corruption where a school that would normally cost one-million francs to build was being set at thirty-million francs and awarded to a company run by relatives of the leadership. Elections were cancelled when opposition arose. Many members and villages complained. An alternative association was organized. Bollore claimed it would not deal with the second association because it wasn’t registered, but then neither was the original association until recently. Bollore, once it agreed to the settlement, seems to have shrewdly created a divide-and-conquer strategy to keep the villages jammed up.
In Cambodia, Bollore has stalled but has finally agreed to tripartite negotiations after actions with the company, locals, and the state all at the table. There they agreed to even allow certain NGOs to monitor the negotiations, and after a lot of back-and-forth the UN Human Rights Commission was allowed a representative. The company has already agreed to not disturb sacred forests and cultural sites in its rubber plantations. Issues on the table include compensation. Are these negotiations for real? Our organizer wasn’t sure, but we’re going down that road.
Striking to me is the very determined way that Bollore has adopted a different strategy in each country, I now suspect it is based on what it believes its clout is place to place. In Liberia, the company simply shrugs off its agreement and promises. In Cameroon it does much the same, except that every time there is an action, it agrees to negotiate, but is dilatory in doing so, and bargains in exceptional bad faith on a strategy of containing the conflict in the villages far from the cities. In Ivory Coast, it is divide-and-conquer with a middle-man fabrication that allows them to claim innocence. In Cambodia, they seem to be negotiating in earnest. Clearly this is all a strategy cleared and implemented from Europe, but how outrageous.
During the last discussion I had internet for a fleeting minute. Hitting Bollore and Cameroon on the search, an article popped up that Chairmen Bollore had visited the President again for the first time in four years in May. The article asked if Bollore had replaced France as the colonial power in Cameroon? For good reason, it seemed. Bollore was reviewing its primary investments in Cameroon, and the plantations didn’t even make the top of the list. They own the largest trucking company in country. They have a concession to manage the Douala port. They just “won” a contract under controversial and suspicious terms to build and manage the first deep-water port in central-west Africa. They are building a train between Douala and the capital, Yaounde, to shorten travel time to three hours in another major concession. The list goes on.
Bollore seems to think all of these countries in central Africa are colonies there for its private exploitation and its own financial bottom line. Promises and agreements with the local people are just pieces of paper to them, a means to their ends, and nothing that they take very seriously or seem to be very worried that the governments will bother them about, since they, and not the government, are the big dogs barking here.
Original source: ACORN
TWITTER
FACEBOOK
WHATSAPP
PRINT
E-MAIL
TWITTER
FACEBOOK
WHATSAPP
E-MAIL