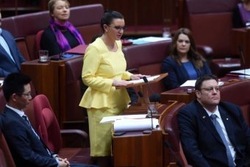 Senator Jacqui Lambie is vowing to push for an overhaul of the Foreign Investment Review Board when parliament resumes. (Photo: AAP/ Lukas Coch)
ABC | 9 August 2016

Jacqui Lambie to push for Foreign Investment Review Board overhaul

By Brett Worthington
Tasmanian senator Jacqui Lambie is vowing to push for an overhaul of the Foreign Investment Review Board (FIRB).
The re-elected politician says she will grill officials when they front Senate Estimates later this year over FIRB's history of approving foreign farm and asset purchases had been against the national interest.
"I just don't think they're getting the job done," she told RN Drive.
"Whether it's the Chinese or anybody else buying from outside and when it comes to assets like our power and our water and what's going on with cyber security and all the rest.
"I've had a gutful like many other people have of selling our assets and leasing our assets out there. We've had enough."
Debate about the role of the FIRB has raged this week as it considers the Chinese state-owned business State Grid's bid for a 50 per cent stake in Australia's largest electricity network.
The FIRB is required to review all foreign investments in farmland, irrespective of size, once a buyer has a portfolio worth $15 million.
It also assesses all agribusiness sales above $55 million.
There is also an automatic trigger for the FIRB to review any foreign government-owned companies' bids to invest in Australian farmland.
Senator Lambie last year failed in her bid to amend investment laws to require all foreign investment in land to be reviewed by FIRB, regardless of the sale's value.
"You can only sell the farm gate once," she said this week.
But Professor James Laurenceson, from the Australia-China Relations Institute, rejected the need for an overhaul of FIRB.
He told RN Breakfast the appointment of former ASIO boss David Irvine to review board late last year had it well placed to assess foreign purchases.
"Look I think it is helpful to have someone like David Irvine casting their mind over these deals and look each deal is going to be different.
"I don't think it necessarily serves the national interest to have a fixed-in-stone approach."