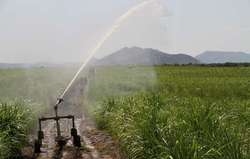 Ethiopian Sugar Company's plantation in the Lower Omo Valley.
Bloomberg | 13 June 2016
Ethiopian China-backed sugar-export push hits cash, design snags
William Davison
Ethiopia’s development of Chinese-backed sugar plants in the country’s south, part of a plan to become one of the world’s top 10 exporters, is struggling because of a lack of funding and technical expertise, a research group said.
Delays also caused by the project’s remoteness, the absence of existing infrastructure and failings of a military contractor cast doubt on the future profitability of the Kuraz project and whether it will succeed in transforming herders’ lifestyles, Benedikt Kamski, a doctoral researcher at the Arnold-Bergstraesser-Institute in Freiburg, Germany, said in a note for the Omo-Turkana Basin Research Network.
“Five years into the project, the sugar industry in the Lower Omo Valley is still in its infancy, which raises doubts about the economic returns and the feasibility of the project,” he said. “It remains to be seen whether the unprecedented changes already brought to the region and its people will translate into the desired local development push.”
The state-owned Sugar Corp. aimed in 2011 to invest $4.6 billion in 10 new processors nationwide to annually produce 2.3 million metric tons of sugar by the end of a five-year growth plan in July 2015. No projects are complete and the corporation is again importing almost 200,000 tons of cane to meet domestic demand this year after a drought cut production.
Dry Spell
Growth in Ethiopia, one of Africa’s fastest-expanding economies, may slow to 4.5 percent in the fiscal year that ends July 7 from 8.7 percent last year after the dry spell curbed agricultural output, according to the International Monetary Fund. The government suspended offering large-scale agriculture leases in March after widespread investor failures, including that of India’s Karuturi Global Ltd., whose 100,00O-hectare (247,105-acre) plot in the western Gambella region was mostly on a floodplain.
More than 200,000 ethnically diverse people affected by conflict caused by resource competition populate the Lower Omo. The sugar project, known as Kuraz, has raised donor concern over forced evictions, dwindling resource access and the impact on Lake Turkana, which straddles the Ethiopia-Kenya border.
Lenders including the Export-Import Bank of China, China Development Bank Corp. and the Industrial & Commercial Bank of China agreed to loan Sugar Corp. $1.63 billion, according to Ethiopia’s Finance Ministry and the ICBC. The first repayments are due October. The corporation has so far received $835 million in dollar-denominated credit, it said in a report to lawmakers last month.
‘Huge Risk’
The state-owned Commercial Bank of Ethiopia loaned Sugar Corp. at least 49 billion birr ($2.25 billion) by May 31, bank spokesman Ephrem Mekuria said by text message. Sugar Corp. spokesman Gashaw Aychiluhim said he couldn’t comment until a progress and planning report was completed.
Such a figure would represent about 40 percent of outstanding loans at the nation’s largest lender, according to Abdulmenan Mohammed Hamza, a London-based independent Ethiopian economist specializing in the banking industry. The company’s failure to complete the projects and the large loans are a “huge risk for the bank,” he said.
Metals and Engineering Corp., which is run by serving military officers, is constructing Kuraz I, the project’s first plant, which was scheduled for completion in 2013. Consultants say the processor is 75 percent finished, while, according to the corporation, the military contractor’s received 97 percent payment.
The Kuraz Sugar Development Project comprises four factories on 100,000 hectares, which is a reduction from a plan for five plants and 175,000 hectares, according to Sugar Corp.’s website.
Only a small portion of the Lower Omo land is likely to have been confirmed as suitable for sugar, according to Kamski. A dam built by a government enterprise to divert the Omo River for irrigation was redesigned in 2013, he said.