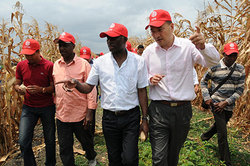 With growing wealth in China, the Chinese are getting more sophisticated and demanding in their food habits. For example, in 1985 they consumed 25 kilos of meat per person; in 2010 it grew to over 50 kilos. This voracious appetite for meat and other food products has put a severe strain on the country’s ability to feed itself.

However, recent Chinese overseas investment in agriculture in the Lusophone world offers a way to ease the problem of supply. Such collaboration will benefit both parties.

Commendable work by Chinese scientists has increased agricultural yields at home, but a growing number of specialists believe that they have reached a ceiling and China needs to look abroad to meet its food demand. China has 22 per cent of the world population living on seven per cent of the world’s arable land.

In recent decades, millions of peasants have moved into cities; by 2014, half of the population was urban. Mega cities such as Chongqing, Shanghai, Beijing and Guangzhou require larger and more complex food supplies.

In 2014, the Ministry of Agriculture reported that 40 per cent of the country’s arable land was degraded as a result of pollution. To attain self-sufficiency in basic staples, most arable land is dedicated to crops such as grain and rice. The country cannot use arable land for non-essential food crops such as vegetable and fruits.

Furthermore, there are few areas suitable for cattle raising. Even grain production is struggling to meet demand. In 2013, four per cent of the world’s grain imports went to China; its fruit imports were valued at US$9.1 billion.

China is increasingly turning to overseas farming and agriculture investment to meet this demand for food. This can bring significant benefits to both China and the Lusophone world; its countries have different ways to benefit from this co-operation.

Angola has a population of 16 million living on 1,243,564 square kilometres. It has 35 million hectares of arable land; only five million are being used and 30 million are virgin land. In other words, her potential for Chinese investment is limitless.

In November 2014, CITIC, one of China’s large state-owned enterprises, announced a US$5 billion investment in Angola to develop large farms producing soybeans, grain, sugarcane and raise cattle. If the project materialises, it will be one of the biggest agricultural investments in the world.

The CITIC project is immensely beneficial to Angola. The recent slump in oil price has prompted the Angolan government to seriously consider diversifying the economy. With adequate investment and planning, agriculture can make a significant contribution to this diversification.

During the Portuguese colonial period, Angola was a powerhouse exporting coffee, cotton and citrus to the world.

Chinese investment in agriculture can help her regain her status as a leading agricultural exporter. Since most of the population is rural, this agricultural project can generate hundreds of thousands of jobs, alleviate unemployment and mitigate rapid and chaotic urbanisation.

Mozambique, with an area of 800,000 square kilometers and a population of 24 million, is equally promising as a major agricultural centre; her potential has remained largely untapped. She has 35 million hectares of arable land, with only 10 per cent being used. So far the largest Chinese project is a US$250 million investment by a Hubei group in a rice farm in Gaza province. Other Chinese companies have invested in cotton mills.

China has also funded an agricultural research centre with over 100 Chinese experts dispatched to Mozambique. In 2015, another Chinese company was reported to have invested US$5 million in a cashew nut project.

Guinea Bissau is a small country with a population of only 1.6 million on 36,000 square miles. It is endowed with many rivers and streams, and its soil is fertile. The political stability after the July 2014 election offers new opportunities for Chinese investment in agriculture and other areas such as fisheries. The country was once a major producer of peanuts, cashew nuts and cotton; Chinese investment can revitalise these sectors.

A Chinese company has expressed interest in investing in rice and cotton plantations in the region of Bafata.

In contrast, Brazil, with an area of 8,511,667 square kilometres, is the fifth largest country in the world. Unlike USA and China and their large stretches of deserts or Canada with its ice-covered terrain, Brazil has many rivers including the Amazon, the longest on earth. It is dominated by forests and fertile plains. Large portions of its 600,000 square kilometres of arable land remain unused.

Brazil, main exporter of grains and soybeans to China

Agriculture has become one of the most important and lucrative sectors in Sino-Brazilian relations. Brazil is one of China’s major supplier of grain and soybeans. In 2003, China was the largest importer of Brazilian agricultural products, worth US$1.82 billion. In 2009, the Brazilian Ministry of Agriculture reported that 12.6 per cent or US$5 billion worth of agricultural products went to that country. Her soybean exports to China reached 11.3 million tons in 2006, an increase of 50 per cent from the previous year.

The signing in October 2009 of a Letter of Intent with the state of Mato Grosso do Sul allowed a Chinese company, Jiangxi Sanhe International Investment, to invest in state land; this marked the first major Chinese investment in Brazil.

The agreement commits both parties to develop farming ventures. The Brazilian side will provide land and basic infrastructure and the Chinese financial investment.

The acreage is not specified but will increase with the different stages of implementation. As the world’s largest beef producer and exporter, Brazil is advanced in cattle-breeding technology. The state of Mato Grosso do Sul will also contribute agricultural scientists and experts in cattle-raising. Jiangxi Sanhe will invest up to US$1 billion in the project. Most of the land will be used to grow maize and soybeans and to raise cattle. Smaller portions will be dedicated to plant trees for timber.

The project also expects to produce other goods such as honey, butter and cheese; it is expected to create up to 10,000 jobs for the state.

In 2011, Brazilian media cited a report by the U.S. Department of Agriculture that a Chinese group from Chongqing co-signed a US$2.5 billion agreement to produce soya in the state of Bahia; the size of land to be utilised by the Chinese company was not specified.

There are also several reports of China’s interest in thousands of hectares of Brazilian farmland. However, details on the location and size of these lands remain patchy.

Portugal does not have large areas of agriculture land. But she too can offer important niche products to the smart investor.

In 2013, China overtook France as the largest consumer of wine in the world and her thirst is likely to grow; but Portugal’s share of this lucrative market has remained small.

Since 2009, the severe economic crisis in Europe has led to a decline in the export of wine. One way to improve Portugal’s position in the Chinese market and to compete with large wine producers from France, Australia and Chile is to form joint ventures with Chinese companies. Some Chinese businesses have already expressed interest in acquiring wineries in Portugal.

Rice and Cassava from Timor-leste

In Timor-Leste, a Chinese company, Longping High-tech, has been assisting the country in improving rice cultivation. The project is so successful that the Timorese government and Longping will expand the project to three other districts.

China Green Energy is currently negotiating a lease of 12,000 hectares of land for cassava plantation. There are further avenues for growth.

Timor-Leste does not have large tracks of land; but its many microclimates make it ideal for production of rare and expensive agriculture products such as spices and coffee. The reputation of such Timorese products dates back to the early 16th century. More sensitive to food safety and health concerns, better off Chinese have turned to organic products – Timorese products are 100 per cent organic. The demand for Timorese coffee is already on the rise and businesses from Macao have expressed interest in investing in the coffee sector. Timor-Leste is yet unable to meet this Chinese demand; but Chinese investment in the sector can help to resolve the problem.

The potential for development is enormous in the Lusophone countries. More work is needed to facilitate the implementation of these projects. There are minor irritants. For instance, a US$250 million Chinese investment in rice farming in the Limpopo has been controversial, with an estimated 80,000 people displaced from their land.

In Angola, accusations of Chinese ill-treatment of farm workers have strained relations between local people and Chinese. Problems such as bureaucratic hurdles, unclear laws on land ownership and fear of Chinese land grabs must be addressed. Transparency and, in particular, dialogue with local communities will avoid misunderstanding and malicious rumours.

Sino-Lusophone agricultural co-operation is mutually beneficial to both parties and can address the challenges each faces. Chinese investment in agriculture creates millions of jobs and reduces the over-dependence of countries like Angola and Timor-Leste on oil exports.

China will benefit by getting access to large areas of fertile land and reduce the costs of feeding a more demanding society.

By investing abroad in the production of non-essential food like tropical fruits, soybeans and spices, China can use its scarce land resource to cultivate essential products such as rice and grain. The benefits to both parties are simply too great to be ignored. (Macao Magazine, by Loro Horta, photos Xinhua News Agency and Macaulink)