MALOA's position on the court judgement and the Malen land issue 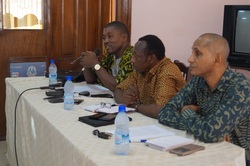 "We continue to maintain our innocence in the matter that was brought to the courts by Socfin," MALOA representatives told the press in Freetown on 10 March 2016.
Green Scenery | 10 March 2016

MALOA POSITION ON THE COURT JUDGEMENT AND THE MALEN LAND ISSUE

1. MALOA’s position on the court case and sentence


• We continue to maintain our innocence in the matter that was brought to the courts by Socfin. I never incited anyone and I will never do that. We held a meeting for land owners and holders to process to Pujehun and formerly lodge complaints to the authorities. Our procession was interrupted by the police who reasoned with us to disperse of which we did peacefully.

• Ample evidence showed that none of us was seen at the site where Socfin claimed we destroyed their growing crops worth Le 200,000,000. In fact Musa Sellu was in Bo on a private visit, while Sima Mattia and myself were also in Bo for a CSO engagement when the incident took place.

• MALOA executive did not conspire to cause any crime. MALOA executive were acting within the laws of this country which bestow the right to every citizen to associate, meet, express opinion and seek interests. MALOA meetings were always communicated to the police and chiefdom authorities, however, many of these meetings were deliberately scuttled.

• The sentence was not commensurate to the fines. While the sentence is viewed as moderate the fines are extremely too high for us who are out of work because we have lost our livelihoods.

• We believe this was a tactic to get us into prison so that we cannot raise our voice on the unacceptable land deals in Malen Chiefdom.

2. The land issue remains to be crucial to MALOA because as we speak more land has been ascribed by SOCFIN. SOCFIN claims that ‘everything’ seems to be okay as they acquired the land legitimately. MALOA continues to say that transparency is lacking in the process, subtle coercion, and sometimes use of brute force on land owning families to give up their parcels of land to SOCFIN is clear and as long as this is what transpired ‘everything’ will not be okay in Malen chiefdom.


• MALOA cherishes Malen and desires the best for the people of Malen Chiefdom therefore MALOA will not use violence to pursue its objectives. This is why MALOA explores peaceful means to try to resolve the land problem in Malen. MALOA approached the Human Rights Commission as a national institution to assist in resolving the problem, MALOA has been part of other affected land owners associations in presenting their problems to Parliament, Ministries, Agencies and even International Organisations.

• MALOA was represented in Paris in a meeting intended to generate dialogue that would lead to resolving the Malen land problem.

• MALOA is not against development in Malen Chiefdom. On the contrary, MALOA wishes to see investments in Malen leading to development that will be community friendly and will help people out of poverty. The investments and development should not hurt the citizens and people of Malen.

3. We have a genuine sense of fear that if we appeal, knowing fully well the difficulties faced by the Judiciary with all due respect to the institution, we may not get the desired justice. However, we are in discussions with our Lawyers for a possible appeal. If our Lawyers advise and we see all the possibilities favoring us we shall do so.


•  We will continue to also seek appropriate redress by exploring international mechanisms such as the:

4. Thank everyone for their support by contributing to the payment of the fines meant to release us from prison. I am now out but we still have 5 more people in languishing in prison. Make the appeal to the public and the international community.