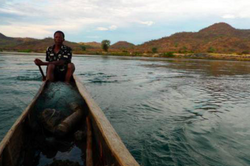 This article was drawn from an interview with Anabela Lemos, and conducted, edited and condensed by Simone Adler. Anabela Lemos is cofounder, campaign coordinator and board member of Justiça Ambiental, the Mozambique branch of Friends of the Earth.

To corporations, the forest is only business. To communities, the forest is everything: trees, medicine, culture, spirituality. Land-grabbing and the removal of communities from forests and land breaks the community, displaces access to food and water, and uproots the connection to nature and [local] knowledge. If the community structure is broken, if the land - the means of food production - is lost, we lose everything.

Land That Can Only Grow Stones

In Mozambique, where 80% of the population is campesinos - traditional, family farmers - companies are taking the best, most fertile land and moving people to land that can't grow anything. For example, the coal mining project in the Tete province relocated people from the fertile soil by the Zambezi River, with the promise of houses and two hectares of land per family. They were moved to an arid place with land that can only grow stones, as they say, losing access to the land and river their lives depended on.

When a foreign company wants to extract [natural resources], the government grants them the rights, claiming ownership of whatever is beneath the ground. Legally, these extractive projects need to be accepted by the communities, but the legal system doesn't work properly.

Activists in Mozambique formed Justiça Ambiental [JA] in 2004 to address issues of food, water, mining, extraction, forests, and energy as they relate to the climate crises. In 2008, JA became a member of Friends of the Earth International. JA keeps civil society informed and brings awareness to people in cities who are disconnected from rural areas.

We organize to support farmers and communities in taking back their land, their forests, and their rights and demand that our government does not jump on the GMO bandwagon. We work on leveraging legal support for communities in the struggle against mining, despite repeated instances of our cases being turned down in the courts. We are still waging a 14-plus year fight to stop the Mphanda Nkuwa dam from being built on the Zambezi River. We know that change comes from the ground up and that together we have the power to build movements for our collective struggles.

There is an old saying in Africa: the land doesn't belong to us; it belongs to our children, and the children of our children.

In the past decade, Mozambique has seen a huge increase in land-grabbing and foreign investment in agriculture and natural resources, [coupled] with pollution and climate change. The government decided that poverty and hunger would be solved by agribusiness, but everyone knows this is a lie. Every time a corporation takes land from a campesino farmer, it leads to poverty.

In reality, the motive behind this business model is corporate monoculture - everyone farming the same crops on land owned by corporations. And for what? To export cash crops to other countries, not to grow food for people here.

Corporations and their government representatives go into communities to try to convince farmers, who don't know about their legal rights, to sell their land or accept GMO seeds. They make promises of a better life, but it's a false promise.

By the time we find out about investments or projects, the agreement has already been approved and signed, the land has already been grabbed, or companies are already testing GMOs. In this turmoil, there is very little to do other than fight to defend farmers and communities and demand an end to [land-grabbing] projects. The movements are growing here; we've seen advances.

Pushing Back on a GMO-Friendly Mozambique

[In 2008, the government welcomed investment in biofuels produced from a plant called Jatropha.] The president campaigned widely, and convincing small farmers to exchange their land for work. After learning that the GMO seeds were poor quality and the biofuel was not a source of additional farm income, farmers successfully campaigned against the Jatropha projects, which closed down. Still, many farmers lost their land and ended up with nothing.

In Europe, many countries are banning GMOs, kicking out corporations like Monsanto, Syngenta, and Dupont. Africa is the last frontier for these corporations, especially because of weak and corrupt governments. Last year, Mozambique changed its precautionary laws against GMOs [by signing the African Regional Intellectual Property Organization's Plant Variety Protection Protocol]. Mozambique is now testing GM seed [in the Water Efficient Maize for Africa (WEMA) project].

There are signed agreements between several Southern African Development Community countries to push forward the WEMA project of genetically modified corn, which Monsanto and the [Gates Foundation] are behind. One of the many resulting problems from this is that these GMO seeds can't be saved; they need to be bought again [each season].

In the Nacala Corridor - Mozambique's most populated area with one of the last tropical forests - the government offered free land to an agribusiness [venture] from Brazil, Japan and Mozambique. Known as ProSavana, the monoculture project would export soy and other cash crops to Japan. [The four million] campesino farmers in the Nacala Corridor would face massive land grabs.

No information was given to Mozambicans; we only found out through international civil society organizations. The National Union of Peasants (UNAC) then began collaborating with groups in Japan and Brazil in a campaign against ProSavana. We sent our representatives to Japan, and together, we brought our campesino voice to the government. In 2014, we discovered the leaked [secret] plans. [The program has yet to be officially implemented] but over time, land is slowly being taken.

Mobilization Is the Way Forward

Our most important work in Justica Ambiental is to raise awareness about food sovereignty, the law, and land rights. We want to have control over the food we grow and eat, and don't want to rely on imports.

The power is in the hands of the people. If a farmer doesn't want to give away their land, they can say no - they have that right. We've seen the power of people on the ground doing work such as community forest exploration, which has countered deforestation and slowly taken control of small forests.

The campesino movement is strong, and we are not accepting this turn toward extractive industry and agribusiness. Solidarity [locally and across borders] is the only way to strengthen a growing movement. We need to support each other and connect our regional and international struggles to make change together.

This is the seventh article in a series which features interviews with grassroots African leaders working for seed and food sovereignty, the decolonization of Africa's food system, and the preservation of traditional farming practices. This series is made possible with support from New Field Foundation and Grassroots International.