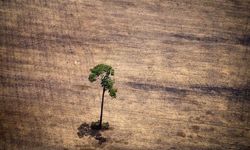 View of a tree in a deforested area in the middle of the Amazon jungle during an overflight by Greenpeace activists over areas of illegal exploitation of timber. October 14, 2014 (Photo: RAPHAEL ALVES/AFP/Getty)
The Takeaway | 18 January

One of the largest pension investors in the United States, TIAA-CREF, is facing accusations that its investments in Brazilian farmland are not socially responsible, or even illegal.
A recent report from Grain, an international organization that supports local landownership, found the company bypassed a 2010 Brazilian law banning large-scale land purchases by foreign companies. Since the law changed, TIAA-CREF has itself reported that its acreage there has more than doubled from 2012 to 2014.
TIAA-CREF, which manages the retirement savings of more educators than any other institution, pioneered institutional investments in global agriculture. Since 2007, its holdings have grown to include 1.4 million acres worldwide, with a reported value of $5.1 billion at the end of 2014.
The report from Grain also alleges that some of that land was purchased from notorious land grabbers who are accused of stealing it from poor farmers before selling it to TIAA-CREF.
Devlin Kuyek, one of the lead researchers on the Grain report, says this type of acquisition is illegal and fuels expansion into previously uncultivated terrain.
TIAA publishes an annual report on its agricultural investments, including maps of their holdings. In 2012, almost half of their Brazilian holdings were in the state of San Paulo, where the cultivation of sugarcane has been longstanding.
But by 2014, almost a third of the company’s much-expanded land holdings were in the country’s northeast in the states of Maranhao, Piaui, and Bahia, a place where the cultivation of soy has expanded since 2006.
That land is located in Brazil’s savannah, known as the cerrado. Along with the Amazon, it is one of the country's most beautiful and vast natural ecosystems. Gustavo Oliveira, a doctoral candidate at the University of California Berkeley, warns that it has enjoyed many fewer environmental protections. Specifically, soy cultivation in the region has increased into native vegetation since 2006.
“We've seen a very positive development of Brazil and international attention to the Amazon,” Oliveira says. “The downside of that has been the absolute sacrifice of the cerrado and other ecosystems in Brazil.”


While TIAA-CREF has not released the exact locations of its holdings in the cerrado, the deforestation and social impact of soy cultivation in the area is worrying.
For the first time publicly, TIAA-CREF responded to these allegations in an interview with The Takeaway, though a public relations officer said the company has spoken with our partner the The New York Times off the record.
José Minaya, senior managing director and head of private markets asset management at TIAA-CREF, says the company has a legal structure in Brazil and stands behind its assets there. He says it uses title searches and satellite data to verify that the holdings it purchases have been legally acquired and previously commercially cultivated.
But Oliveira says that, especially in the northeast, land registries are woefully unreliable, with some Brazilian states having registered titles for acreage that nearly doubles the actual area of the state.
“You might be able to point to a title that goes back 30 years,” he says. “But that on its own doesn't demonstrate that the establishment of that title was legal in the first place.”
Original source: The Takeaway
TWITTER
FACEBOOK
WHATSAPP
PRINT
E-MAIL
TWITTER
FACEBOOK
WHATSAPP
E-MAIL