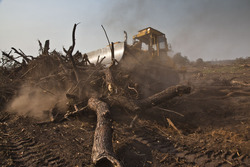 Bulldozer preparing lands at the Karuturi farm in Gambela, Ethiopia (Photo: Alfredo Bini)
Capital | 4 January 2016
Government agency strips Karuturi’s land privilege
By Muluken Yewondwossen
The Ethiopian Agricultural Investment Land Administration Agency (EAILAA) terminated its lease contract with the controversial, Indian based agribusiness giant - Karuturi Global Ltd.
Under the Ministry of Agriculture and Natural Resources Development, EAILAA oversee large-scale and mechanized agricultural investment on land belonging to the ministry.
Daniel Zenebe, Publication Head of EAILAA, told Capital that the agency wrote a letter to the company on December 18, terminating the agreement as of December 15.
The letter indicated that the agency gave warnings to the company on two previous occasions, in April 2012 and June 2015, requesting that the company develop the land as per the agreement.
The letter, signed by Abera Mulat, Director General of the agency, stated that the agency has terminated the lease contract as per the contract agreement between the ministry and Karuturi.
The agency claimed that the company has proven unfruitful despite the 100,000 hectare of land it received about nine years ago at Jikawo District and Itang Special District, Nuer Zone in Gambella Regional State.
Initially, Karuturi received 300,000 hectares of land in the region; 200,000 hectares of land was returned after the amount was deemed very excessive and beyond the company’s capacity for development.
“We are now in the process of returning the undeveloped land to the federal land bank,” Daniel said.
Karuturi has been a major source of controversy after international activists claimed its kind of investment amounts to a land grab.
According to the agency, even though the Indian giant received a great amount of land, it has only developed very small parts since it received its lease in 2008.
With skyrocketing prices of food in the global commodity market, the company is mainly interested in investing on cereal products in Ethiopia. Karuturi claims that the arable land it has received is not suitable for investment or needs more initial investment to become productive.
The agency claimed that the company developed only 1,200 hectares of land in the past year. EAILAA’s Public Relations Head said that despite the confiscation of 98,800 hectares of unused land, the company could continue to develop the 1,200 hectares it is currently working on.
A few years ago, the company was marred in controversy with machine rental companies chasing up Karuturi to settle payments.
The company is also in hot water with Commercial Bank of Ethiopia, following the bank’s move to foreclose the company to settle a 55.8 million birr loan Karuturi was unable to pay on time. The foreclosure was later suspended by the court after the company’s appeal.
Daniel indicated that the agency was open to discussions with banks that have stakes on the company, but the public owns land leased to the company, according to the constitution. “Banks cannot sell the undeveloped land, due to that clause in the constitution. They may have a right on the developed land only,” he added.
The company leased the stated 100,000 hectares of land for 20 birr per hectare, per year, for fifty years and was expected to develop the land until 2012, as per the original dealbetween the Ministry and the company.
“Meanwhile, the company developed only 1,200 hectares of land and it did not export any of its product,” the Public Relations Head claimed.
EAILAA is responsible for looking after the food and industrial input of agricultural development established on land controlled by the federal government. This work was previously the remit of the Investment Supporting Directorate until EAILAA formed in 2013.
The Ministry’s office is administrating 3.6 million hectares of land from Oromia, Benishangul Gumuz, Gambella and SNNP for large-scale agriculture investment. The government’s evaluations thus far indicate that mechanized farm investments are below expectations and need more attention.