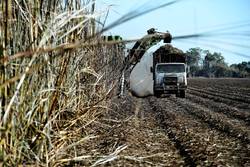 China became the largest investor in Australia’s agricultural sector during the financial year ended June 2014, according to a report from the country’s Foreign Investment Review Board, pouring in 632 million Australian dollars ($450 million), almost twice as much as the year before.

Chinese investment in Australian mining projects fell by a third to A$5.85 billion during the same period, the latest figures available.

Australia’s Seafarms Group is seeking offshore investors to help develop a A$1.45 billion prawn farm in the country’s remote northwest. Nearby, Chinese company Shanghai Zhongfu last year spent A$700 million to launch a sugar and sorghum farm. Integrated Food and Energy Development, a private Australian company, is pitching a project to offshore investors that would convert five cattle stations in Queensland state into a A$2 billion enterprise producing sugar, guar beans and cattle.

China’s push into Australian agriculture has been more cautious than its rush into mining, in which companies spent big on projects at high prices only to lose out as metals prices fell and costs soared. The agriculture investors are mostly limiting their ambitions to joint ventures and stakes in exchange for a share of output. They’re tapping local expertise and retaining existing managers, rather than trying to gain full ownership of farms or launch major greenfield projects, local deal makers say.

Australia is still just a small part of China’s global agricultural portfolio: Of China’s US$43 billion in investments and contracts in overseas agribusiness over the past 10 years, Australia accounts for only $1.5 billion, according the China Global Investment Tracker database.

But Australia’s agriculture deals all happened in the past five years, and its share of Chinese foreign investment is set to grow now that the two nations have a free-trade deal, reached last November, that lifts restrictions on livestock exports and eases scrutiny of foreign investment.

Consumers perceive food grown in Australia’s relatively pristine natural environment to be three times as safe as food grown in China, and 50% healthier than food grown in the U.S., Brazil or France, according to a 2013 Reputation Institute survey. This makes Australian food more attractive to consumers who can afford quality products, such as China’s growing middle class.

“Australia can’t feed all of China, clearly, but we do have the high-quality premium output to meet middle-, upper-income demands and tastes,” said Aaron Hood, chief investment officer of Minderoo Group, owned by iron-ore billionaire Andrew Forrest. Mr. Forrest and other mining magnates like Gina Rinehart have spent hundreds of millions of dollars on cattle stations, dairy processors and slaughterhouses in recent months.

The interest from the world’s second-largest economy in Australia’s farming sector is already stoking political opposition as fears grow the Chinese government will end up controlling too much land. Agriculture Minister Barnaby Joyce recently warned state-owned Chinese companies off one potential land deal.

China is the top destination for Australian agricultural exports, taking in about one-fifth of the total. Beef producers and makers of infant-formula powders have all drawn strong interest from Chinese buyers recently.

Unlike China’s rush into Australian mining, which was led by state-owned giants, the agricultural-assets embrace is spearheaded by private companies.

“What has changed is that a lot of mining deals were done by state-owned enterprises who were given a mandate to go and secure supply,” said Brodie Treloar, a managing director at investment bank Moelis & Co., who has advised a number of Australian dairy processors on attracting offshore buyers. “Command driven decisions led to mistakes, whereas now the Chinese government is a lot more pragmatic.”

Its billionaire chairman, Liu Yonghao, outlined his strategy in March at China’s annual National People’s Congress, saying he would look to partner with local companies in Australia to develop new processing facilities, rather than buy land outright.

China’s approach to agriculture, heavy on fertilizers and pesticides, has “degraded the land,” Mr. Liu said. By contrast, “Australia has a vast landmass, good grasslands and sunshine.”

Last month, New Hope agreed to a A$100 million joint venture with two well-known Australian dairy dynasties—the Moxey and Perich families—in Victoria state. The goal is to export 200 million liters of milk a year to China within the next decade, while almost tripling production.

In Queensland state, Chinese beef giant Chongqing Hondo Agriculture Group has pledged to invest A$100 million in local cattle stations over the next year in exchange for a share of the beef produced. That follows recent small beef deals by Hailiang Group, Taihua Food and Yiang Xiang Assets.

A landholding the size of Kentucky owned by the Kidman family, a 116-year-old beef-farming dynasty, has drawn informal approaches from Chinese investors. Bankers say it could be worth some A$350 million. The concurrent sale of Consolidated Pastoral Co., another large beef operation in the region, has sparked suggestions a single Chinese buyer could combine the two into one of Australia’s largest beef producers.