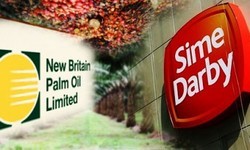 New Britain Palm Oil, that was acquired by Malaysian oil palm giant Sime Darby earlier this year is now looking at Mindanao as its next area of expansion.
Foreign company to develop 30,000 hectares for oil palm

A foreign-owned company producing sustainable palm oil is looking at Mindanao as its next area for expansion.

The company is targeting to develop 30,000 hectares for oil palm plantation.

"This is a multibillion investment since it will cover 30,000 hectares. They plan to put up three processing mills and one refinery. Their market will be domestic and send it back sa marketing units nila sa Singapore," Peter Lavina, member of the technical working group of the Philippine Palm-Oil Development Council (PPDC), said at the sidelines of the Kapehan Sa Dabaw at the SM City Annex.

At present, the country is importing a total of 350,000 to 400,000 metric tons (MT) amounting to P35 billion annually. Philippines is importing palm oil from neighboring Asean countries, like Malaysia, Indonesia, Singapore.

The Philippines has a total area of 75,000 hectares palm oil land producing areas, around 6,900 hectares of which are in Mindanao, the rest are in Palawan and Bohol.

"The biggest bulk of the palm oil producing land in the country is in Mindanao, particularly in North Cotabato, Sultan Kudarat, Maguindanao, Caraga, and Agusan del Sur," Laviña said, adding that measures should be made to lessen import activities to other countries and enable the Philippines as a "palm-oil sufficient" country.

"The major challenge that the oil palm industry in the country is facing is the little attention given to it and only few farmers are aware of the potentials of the palm oil. In Mindanao, peace and order issue also contributes to the problem," Laviña added.

He also said that in 2013, PPDC, in partnership with the Philippine Coconut Authority (PCA) and Department of Trade and Industry (DTI), had crafted the Philippine Palm-Oil industry roadmap, which calls for the planting of 300,000 hectares of palm oil as target for 2023 for us to be a self-sufficient country but until now, no proper implementation has been done.

Meanwhile, the PPDC will conduct the 9th National Palm Oil Congress on August 19-20 at the KCC Mall of General Santos City.