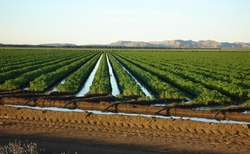 The State Government is set to take to market a big parcel of land on the Ord River irrigation scheme in a litmus test of its relationship with a major Chinese investor in WA’s far north.

The release of about 5000ha, taking in areas known as Mantinea and Ord West Bank, has been delayed since last year as the Government grappled with what form of land tenure to offer potential developers.

Lands Minister Terry Redman is expected to confirm the long-awaited release today as part of the Government’s vision for the Ord to become an agricultural powerhouse.

It is understood the land will be offered as freehold on the condition the successful bidder meets development targets.

This contrasts with the long-term lease tenure being offered to Shanghai Zhongfu-owned Kimberley Agricultural Investments, which is baulking at proceeding with development of a 6000ha site called Knox Plain.

KAI, touted by the Government as a billion-dollar investor in a sugar industry based around Kununurra, is digging in on its demand for freehold title in return for developing Knox for irrigated cropping at an estimated cost of $25,000/ha.

To complicate the land release, KAI has said it is interested in the Mantinea and Ord West Bank sites if they come with freehold tenure.

A chunk of the land will be excised from the Consolidated Pastoral Company’s lease over Carlton Hill Station, but cattle grazing is expected to continue for the next few years.

Development is subject to the successful bidder forging an Aboriginal development package with traditional owners the Miriwung and Gajerrong, and to environmental approvals.

KAI, named preferred developer of Knox and a 7400ha site known as Goomig in 2012, recently planted its first crops of chia and sorghum at Goomig.

The others to show an interest in Knox and Goomig were Indian sandalwood grower TFS and AACo, which had plans to grow cotton and run cattle feedlots.

The land release comes with the Ord’s horticultural industry under threat from the destructive pest Mediterranean fruit fly.

The Department of Agriculture and Food WA has detected six male Medfly in traps at three caravan parks in Kununurra.

DAFWA plant biosecurity director John van Schagen said the detections were of major concern for the Ord, which up until now has been Medfly-free.